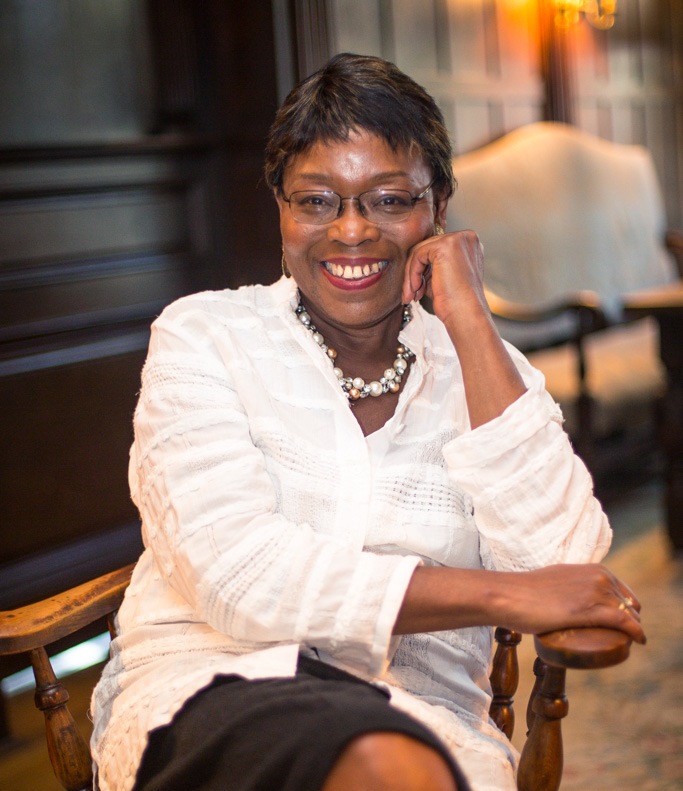 Cynthia Bunton has led International Student House of Washington DC (ISH-DC) for the past three years as President of our Board of Directors.  During her tenure, the House has seen a time of significant growth and exciting change.

Cynthia, a retired United States Foreign Service Officer with over 30 years of executive leadership experience in international operations and strategic management, began her time as President by recognizing the value of building and maintaining a strong community with our Board of Directors, resident scholars, alumni, and advocates.  Under her leadership, ISH-DC has expanded relationships with foreign embassies and enhanced outreach to Members of Congress and other US government officials.   A number of foreign Ambassadors have either spoken at the House or invite our students to join them at their embassies for receptions and discussions.  Under her guidance, a number of Board members have engaged in supporting residents with career advice by participating in networking events and round tables, as well as hosting residents during holidays and other informal opportunities. As a result, we have created an even more diverse and global community of resident scholars at the House and our scholars have benefited from the many various opportunities offered while a part of the ISH-DC family.

Diversifying and strengthening our Board of Directors has also been a significant achievement of Cynthia’s tenure.  Under her leadership, our Governance Committee has engaged in a by-laws revision process, as well as engaged with and secured 15 new prominent members of our Board.  Cynthia has been a steadfast leader throughout her time in office and her accomplishments will be felt for years to come.

Cynthia, who also happens to be an alumna of the House, has left an indelible mark upon our organization.  The Board of Directors, resident scholars, and staff thank her for her leadership, vision, and drive over the past three years and look forward to her continued involvement with International Student House.

International Student House of Washington, DC (ISH-DC) is a place like few others. The House is home to 100 graduate students from 40 countries, learning from each other and sharing their lives. Our resident scholars participate in phenomenal programs at universities around Washington, or engage in professional level internships at exceptional institutions such as the World Bank, the OAS, the United States Congress, their respective embassies, and many, many more. It is here with us at ISH-DC and in Washington that they grow to become our future leaders and learn to work together. It is at International Student House where diplomacy begins. 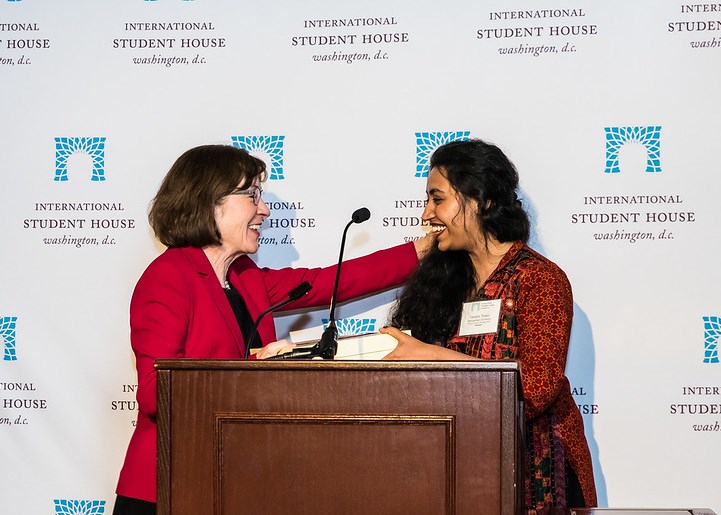 On the evening of November 14, Ambassadors from 10 countries, Members of Congress, special guests, and International Student House resident scholars gathered to honor Senator Patrick Leahy and Senator Susan Collins with our 2018 Global Leadership Awards. We were pleased to recognize these senior members of the United States Senate for their distinguished service to our country and work on behalf of international understanding and education. 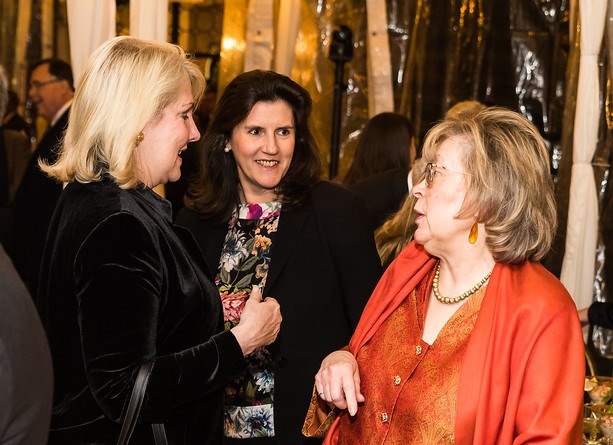 Following a cocktail reception in the Great Hall and Library of our Tudor-style mansion in the Dupont neighborhood, our guests descended to our Garden where ISH-DC Board President Cynthia Bunton welcomed everyone to the House. Our 2018 Global Leadership Awards Honorary co-Chair Rear Admiral Susan Blumenthal also took a moment to thank guests and introduce ISH-DC resident scholar Jan Langle, who spoke about his experience as a law student from Germany and presented Senator Leahy with the Global Leadership Award. Senator Leahy spoke at length about the importance of international understanding and dialogue, and the need for institutions such as International Student House where people from different backgrounds can learn from each other.

ISH-DC resident scholar Varsha Thebo then shared about her experiences from growing up in a rural Pakistani community where education was not available to her, to now being a college graduate and current graduate student. Varsha then presented the Global Leadership Award to Senator Collins by expressing her gratitude that the Senator is a champion for education. As Senator Collins graciously accepted the honor, she addressed not only the importance of education, but specifically educating girls and young women. Didi Cutler, our Awards Dinner co-Chair, closed the evening by thanking guests for their participation and continued support. 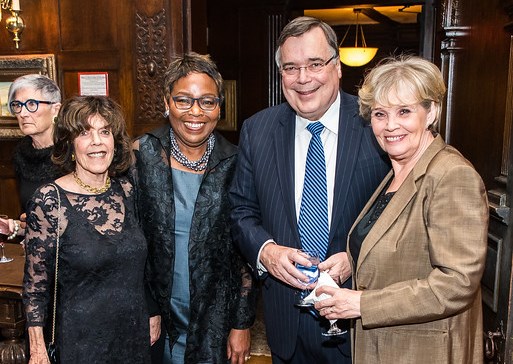 Our many guests who joined us for the Global Leadership Awards had the opportunity to meet our resident scholars and learn that International Student House is a community where we embrace diversity and value the unique contributions of all residents, which we know makes us stronger and will have a lasting impact on future generations. We are grateful to our many friends and sponsors who allow us to continue the mission of ISH-DC, which began over 80 years ago. 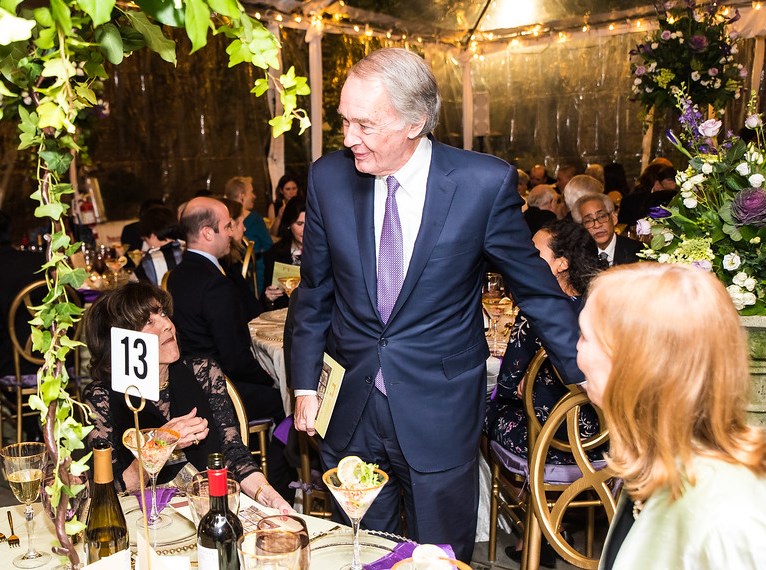 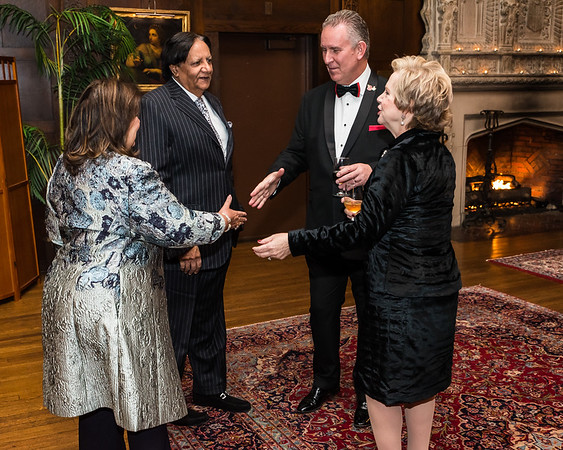 Once again, we would like to thank our generous sponsors who support our House. The evening was invaluable in strengthening our community to provide a place for young scholars from around the world as they pursue their goals and become engaged global citizens.

Click here to view many more excellent photos from the Awards Dinner. 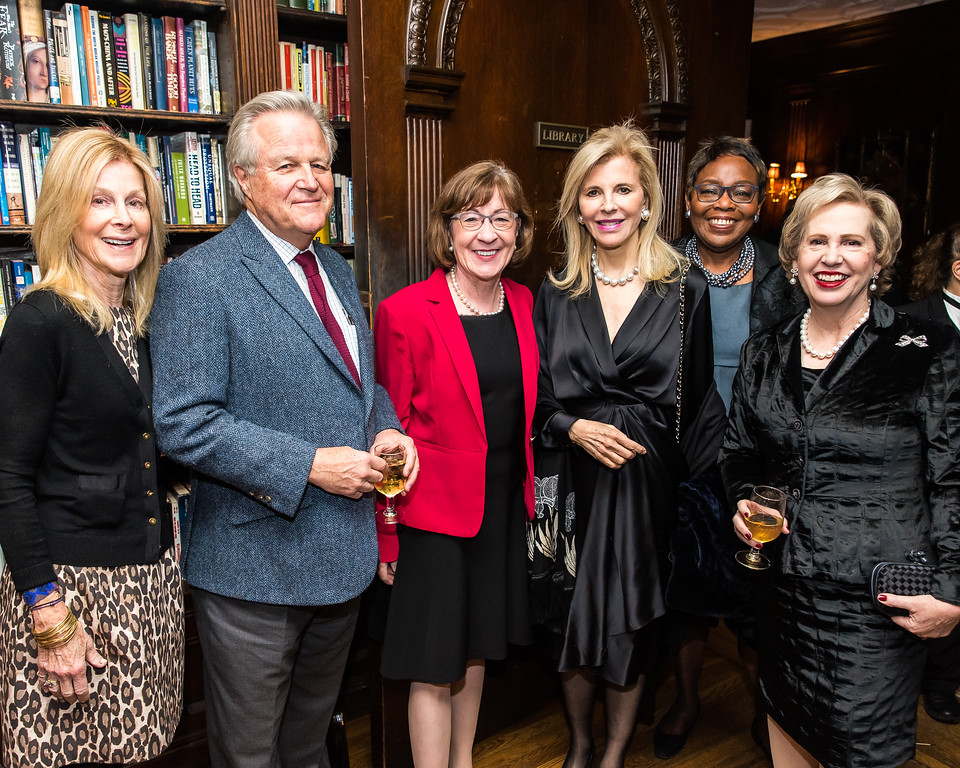 Frank Islam, entrepreneur, philanthropist, civic leader and thought leader, joined International Student House of Washington, DC (ISH-DC) the evening of October 30 to share about his experiences building his company and engaging in his many philanthropic endeavors. Graduate students from over 20 countries enjoyed the opportunity to learn from Mr. Islam’s astute advice, given his highly successful career building his business from a single employee to over 3,000 employees and revenues of approximately $300M before its sale.  He encouraged our young professionals to be entrepreneurs in whatever profession they choose, show up and be the best they can be, and always seek to be better.  Mr. Islam’s inspiring and compelling remarks were well received by the many international students who are studying at universities in Washington, preparing to embark on their own careers in the public and private sectors. 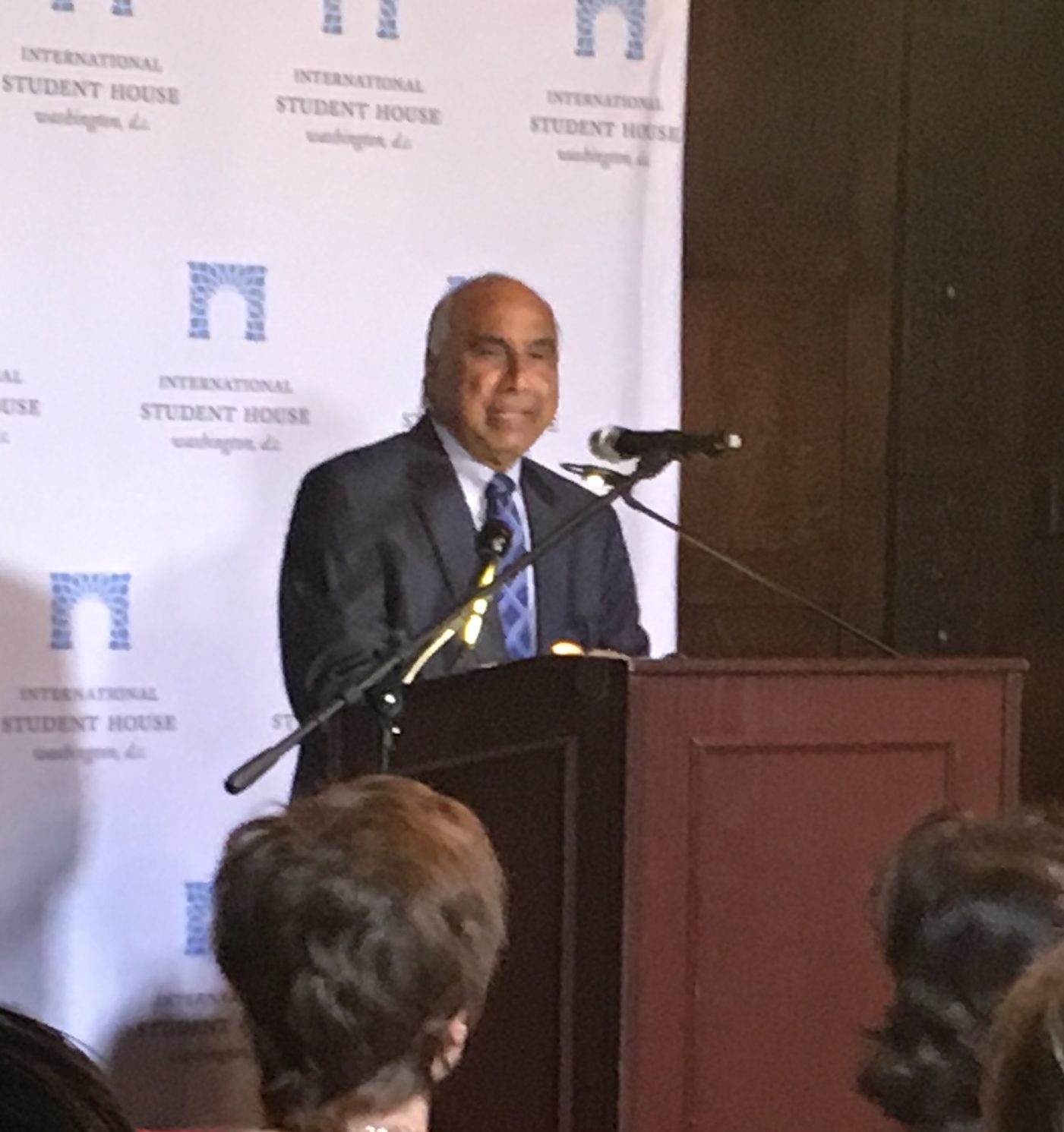 Mr. Islam was introduced by resident scholar Ashish Kakar from Mumbai, who is here in DC studying at Johns Hopkins University.  ISH-DC Board members also attended the evening, and enjoyed dinner and lively discussion following Mr. Islam’s address. We are grateful to Mr. Islam for joining us at the House and engaging with our resident scholars from around the world.  We firmly believe that our young international students are our future leaders and they greatly appreciate the ability to learn from those in Washington who have successfully navigated their own career paths.  We appreciate Mr. Islam’s willingness to share about his experiences and accomplishments with the next generation.
International Student House of Washington, DC (ISH-DC) resident scholars from Russia, Rwanda, the United States, Taiwan, and India, took part in a weekend long Model G20 Summit where they represented the World Trade Organization (WTO). The Model Summit took place at American University's School of International Service and was developed by the Initiatives Executive Director, Ambassador Cecilia Nahón, former Argentine Ambassador to the United States and four-time Sherpa (i.e. Head of Delegation) to the G20. 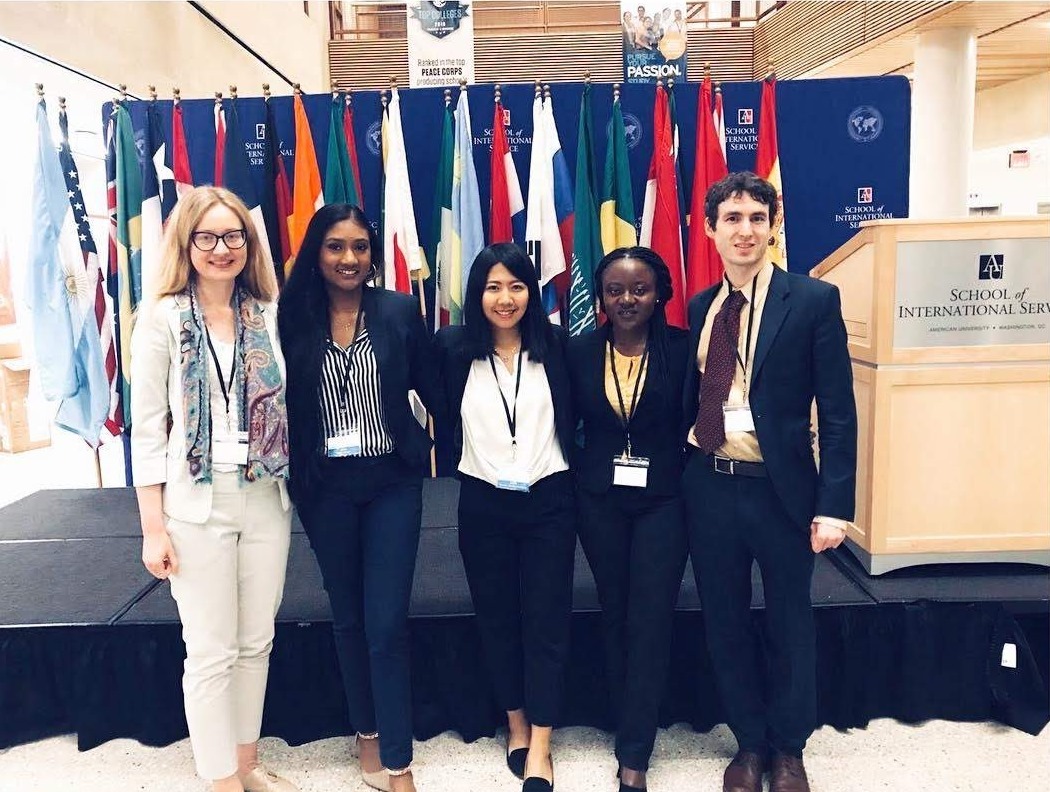 The weekend was filled with formal sessions as “delegations” negotiated on behalf of their country, union, or organization, as well as informal opportunities to connect during morning coffee, lunch, and evening breaks.  ISH-DC participant Mitchell Blatt noted, “It was my first time to try such an event. I didn't really know what to expect the first day, but then I got really into it. I thought it was a long time at first, since it took up most of the weekend. But then I ended up wanting it to continue by the end. Keep negotiating.” 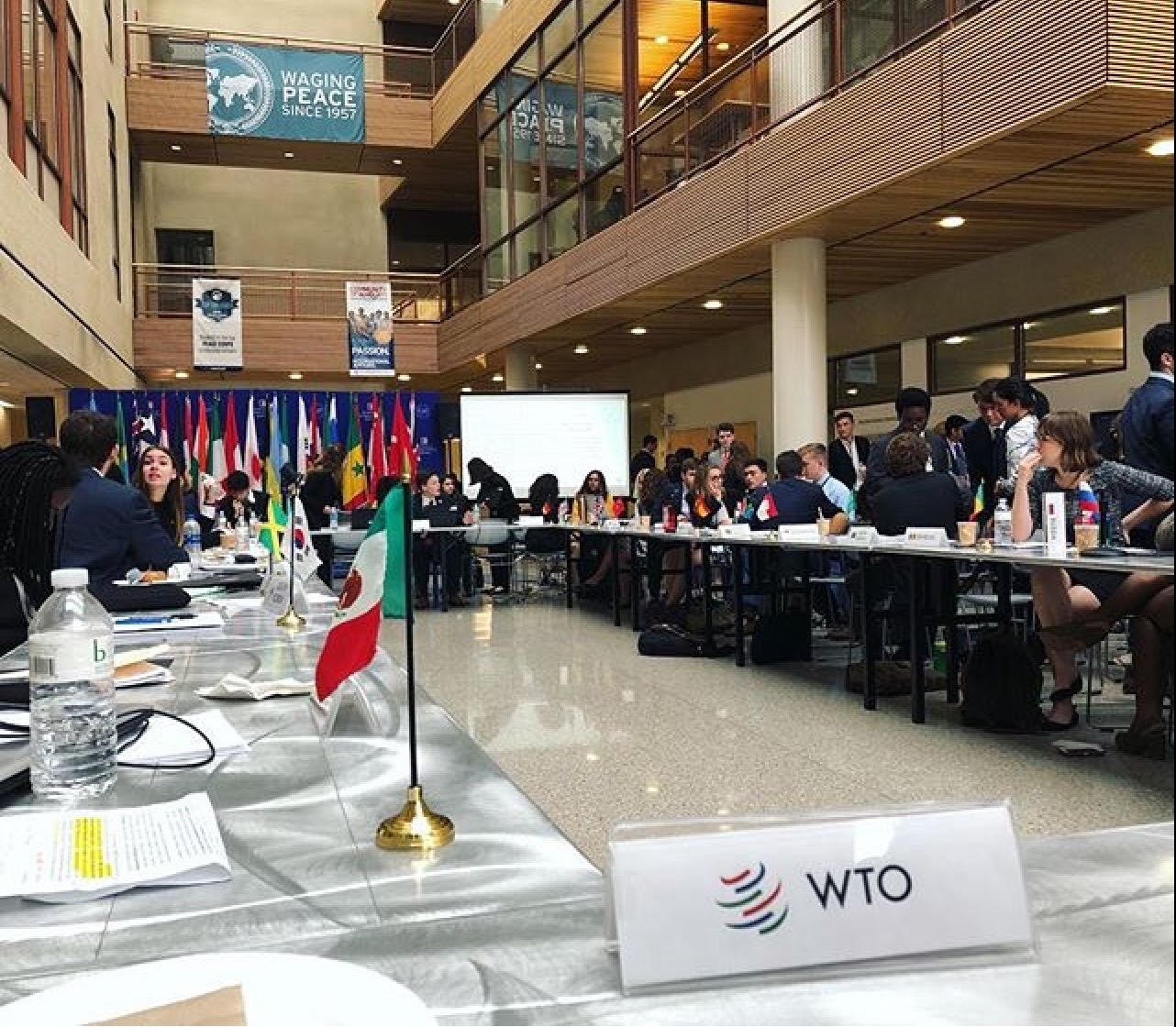 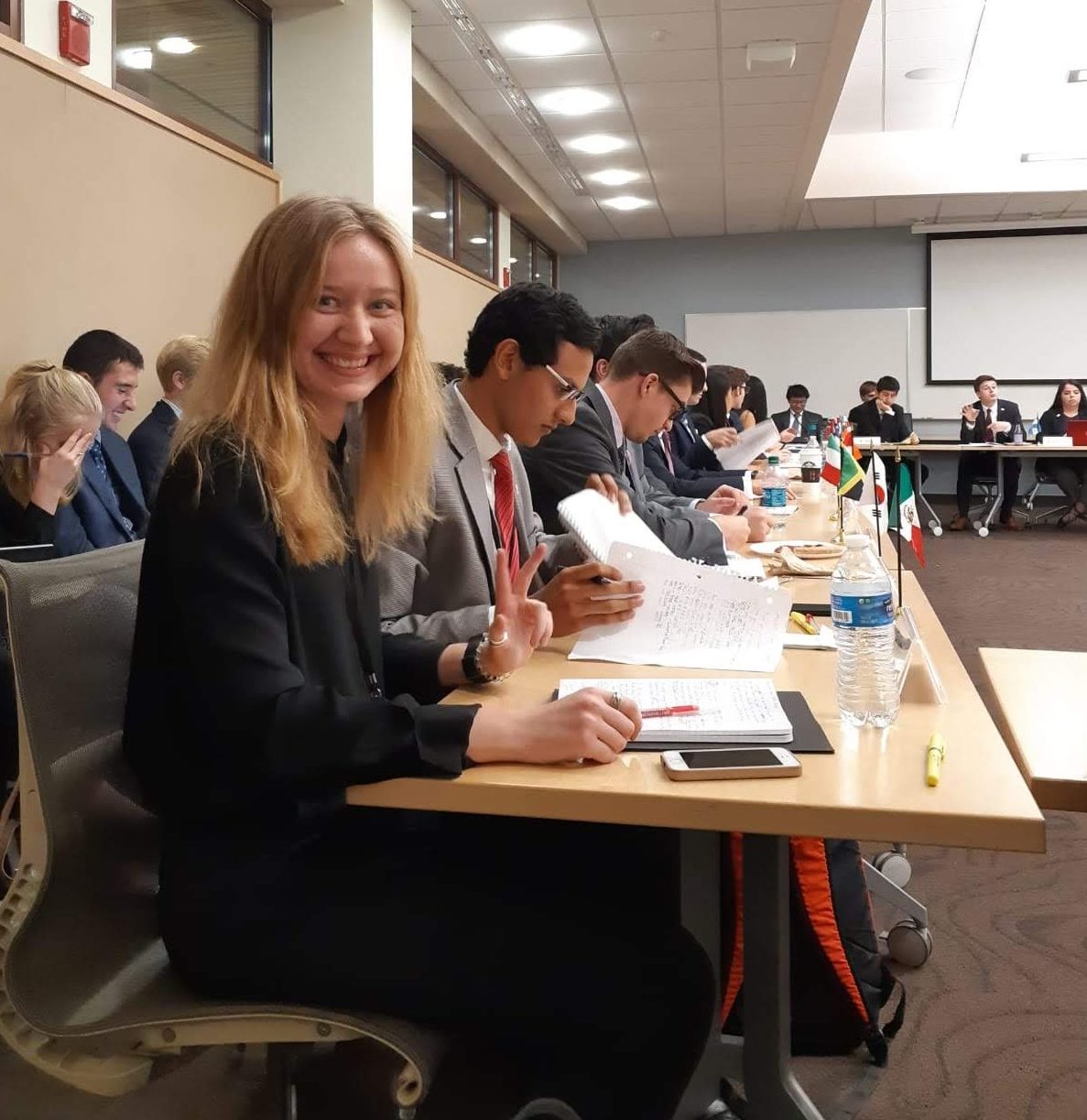 Argentina holds the G20 2018 Presidency, and Saturday, following a long day of negotiations, the Argentine Embassy hosted a wonderful evening of food and salsa for the student delegates.  Although the evening was somewhat of a diversion from the negotiating table, it still presented an excellent opportunity to connect over policies issues with fellow participants. Thank you to the phenomenal coordinators of the Model G20 Summit at AU, and to our fantastic International Student House representatives!
International Student House of Washington, DC (ISH-DC) resident scholars and alumni from around the world had an incredible evening hosted by His Excellency Kurt Jaeger, the Ambassador of the Principality of Liechtenstein. Ambassador Jaeger, along with his wife, Laurette, graciously welcomed us to their residence in mid-June for a summer “Happy Hour” to enjoy wonderful conversation and learn about Ambassador Jaeger’s work representing his country here in Washington.  Our resident scholars also learned many new facts about the incredible country of Liechtenstein as they spent the evening conversing with Ambassador and Mrs. Jaeger, as well at representatives from the Embassy. International Student House actively promotes inter-cultural dialogue and building an international community, therefore we highly encourage our resident scholars to engage in the exciting networking opportunities that are often uniquely found in Washington.  We are immensely grateful to Ambassador Jaeger and the Embassy for such a kind welcome and giving our residents a perfect opportunity to engage in substantive conversation.  Not only were they able to hone their networking skills, but they also learned from the Ambassador’s expertise in both the public and private sectors. What a wonderful evening to remember!