Jonathan Kalin, founder of Party With Consent, spoke to a group of ISH graduate students about sexual assault prevention on college campuses on June 2, 2014. Mr. Kalin shared his personal story behind his involvement with Party With Consent as well as the organizations’ future plans.  An in-depth and intimate dialogue followed, with a question and answer session that addressed a variety of topics such as the state of gender-based violence in different countries, the current state of consent education in the United States, and the immediate results of the recent White House Task Force to Protect Students from Sexual Assault.

International Student House recently welcomed members of four International and International Neighbors Clubs for a luncheon program which featured a lively discussion with a group of ISH resident scholars.

The young scholars discussed their experiences of living in our international community and the broadening opportunities they have had in Washington.

They also shared information about their home countries and the differences in cultures with the clubs, the Supreme Court and others from the Washington residential community.

On Thursday, May 1, International Student House of Washington, DC (ISH-DC) presented a full-day symposium, Breaking the Silence: Addressing Sexual Assault on Campus.  As an organization dedicated to international understanding and dialogue, as well as the protection and well-being of its resident scholars, ISH-DC felt compelled to join the growing number of forces shedding light on the issue of Sexual Assault on College Campuses across the nation.  According to featured speaker Major General Jeffrey Snow, “Frontline leaders are critical to leading the culture change necessary to prevent sexist behaviors, sexual harassment and assault, and in establishing an environment of dignity, respect, and trust.  The DoD aspires to be a national leader in combatting sexual assaults while continuing to prevent and respond to this terrible crime.”  Other distinguished speakers included Senator Robert P. Casey (D-PA); White House Advisor on Violence Against Women, Lynn Rosenthal; and Assistant Chief Peter Newsham from the DC Metropolitan Police Department’s Investigative Bureau; and others from the worlds of academia, advocacy, prevention and response.

As noted by Sharyn J. Potter, PhD, MPH, Co-Director,University  of New Hampshire’s research center:  Prevention Innovations: Research and Practices for Ending Violence Against Women,“It was an honor to be part of a symposium with policy makers, advocates and educators who are bringing national attention and action to a detrimental and ongoing problem that impacts over 20% of our daughters (nieces, cousins, friends) who attend college or university in the United States.  The symposium provided a unique experience to discuss issues that facilitate and constrain our work and to share solutions to address these constrains.”  Dr. Potter presented her 25 years of research and development of Social Marketing Campaigns on campuses to empower students to speak out and against acts of sexual violence. 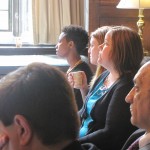 A wide range of topics were covered including current legislation, research, advocacy, prevention and response, victim’s rights and support initiatives.  DC Metropolitan Police Department’s Assistant Chief Peter Newsham focused on his unit’s sexual assault procedures and improvements the Department is taking to ensure victims receive the treatment and justice they deserve.  Dana Bolger and Laura Dunn, both survivors and activists, spoke passionately about their experiences and how their treatment by university administrators led them to establish their own organizations. Daniel Rappaport, Sexual Assault Prevention Coordinator at The Wellness Center at American University, discussed his role as a victim advocate and confidential resource on campus for students, staff and faculty.

ISH-DC is heartened that widespread attention is finally being paid to this issue and remains committed to providing opportunities for further discussion and debate.  To this end, ISH-DC has plans to form an ISH-DC Task Force on Critical Issues on Campus and will continue a series of programs that address this topic.  Kristen Lombardi, Staff Writer from the Center of Public Integrity, who has written an award-winning campus assault investigative series, will speak at ISH in the fall.  Other participants will include those leading efforts to prevent assaults and change the current cultural climate on American college campuses.

addened by the death of Former Congressman and ISH Board Member James Oberstar who died May 3 at the age of 79. Mr. Oberstar, who was the ­longest-serving congressman in Minnesota history, was first elected in 1974 and joined the ISH Board in 2012.

Mr. Oberstar was actively involved in the life of the House as the chair of the Buildings and Grounds Committee and a member of the Governance and Executive Committees.  He supported resident programming with enthusiasm. Mr. Oberstar, who was fluent in French and was awarded the rank of Commander in the National Order of Merit by the French government, served as moderator for the ISH program last spring with Ambassador François Delattre at which he discussed France’s military involvement in Mali. As an avid cyclist, Mr. Oberstar planned to help organize and participate in the annual resident bike ride to George Washington’s Mount Vernon estate.

Jim was born in 1934 in Chisholm, Minnesota.  He graduated from the College of St. Thomas in St. Paul, Minnesota, in 1956, majoring in French/Political Science.  He continued his education in Belgium, Quebec and Washington, D.C.  Jim worked in Haiti from 1959-1962, teaching French, Creole and English.

“Jim was a true believer in the power of international student exchanges and strongly supported our mission.  He will be dearly missed by the ISH-DC community” said ISH Executive Director Tom O’Coin.

ISH was represented at The Congressional Club’s annual First Lady’s Luncheon honoring First Lady Michelle Obama on May 1, 2014.  The 102nd annual luncheon was attended by ISH resident Chimdi Onwudiegwu from Nigeria who is completing her Master’s Degree in International Affairs in Johns Hopkins University’s School of Advanced International Studies. Chimdi’s participation was made possible by ISH Board member Betty Ann Tanner, whose husband, John Tanner is a former Congressman from Tennessee.

In her address, Mrs. Obama emphasized the importance of education.  She noted the significance of cultural exchange and stated that The White House will be shining a brighter light on education. The First Lady discussed her Reach Higher initiative, an effort to inspire every student in America to pursue education beyond high school.

Betty Ann Tanner, a member of the ISH Board of Directors and a Vice President of The Congressional Club, served on the committee to organize the luncheon which included spouses of Congress members, Supreme Court Justices and Cabinet Secretaries.  Mrs. Tanner noted “for one hundred and two years the Congressional Club has honored America’s First Lady by hosting an event in Washington, DC.  This year we were especially glad to hear that Mrs. Obama and the White House will focus on higher education and the added value of international education exchanges.”