Seeing the World through another’s Eyes

A few weeks ago, fellow blogger and close friend Justice Shorter, presented at the International Student House’s Resident Salon series. Justice spoke about disability rights advocacy and shared her experiences as a legally blind person with other residents in the House. 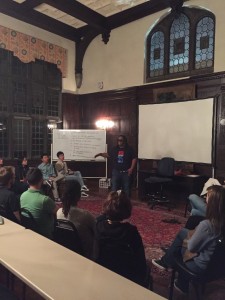 Justice began her presentation by encouraging residents to ask any questions they had about people with disabilities or her disability. Justice’s openness to questions allowed for an honest and authentic conversation. Residents asked straightforward and sincere questions about how to refer to people with disabilities, how to better accommodate colleagues with disabilities, and what state and federal policies exist to ensure that the rights of individuals with disabilities are protected. Justice explained that even though you may have good intentions, you may still act or speak in a way that can be offensive to individuals with disabilities. It’s important to always think before you speak or act to make sure that you aren’t behaving in a way that could offend someone that you care about or work with. Above all else, Justice recommended to simply start by getting to know the person and see them for who they are and what they like to do, not just by their disability. Everyone has different preferences for how they interact with others and their needs when it comes to friendship and feeling comfortable in social settings. Justice recommended never assuming that people with disabilities need “help” and to always view individuals holistically and genuinely get to know them, rather than minimizing them to the singular characteristic (such as their disability).

This point really resonated with me because I think this truly applies to all people and all interactions. For some reason, I find that a lot of people (including myself) tend to identify one dominant feature or characteristic about someone in order to describe them or understand who they are. While this is sometimes necessary given that it is impossible to fully capture who a person is in a simple introduction, it can easily lead to reducing or categorizing others unfairly. This is especially true in the International Student House, where residents are not solely defined by where they come from or what they look like, but who they are and what they enjoy doing as individuals.  I talked about this at length with some of the other residents in the House and we came to the conclusion that while it’s only natural to associate people with dominant features (such as being “the girl that runs a lot” or “the guy that plays piano”), it’s important to make sure that that characteristic is not the only way you view and understand that person.  That kind of single-track thinking limits the many ways in which you could potentially engage with others, find common or uncommon ground and discover shared hobbies or passions. (Unquestioned, this kind of thinking underpins decisions to unfairly and inaccurately categorize entire populations as “rapists” or entire groups of people as “drug dealers.”)

Justice’s presentation emphasized the importance of not identifying someone exclusively by a single characteristic, such as their disability, country of origin, or external appearance. To me, I don’t know Justice as the “legally blind girl”, I know her as Miss Delta, the girl that reads books like she breathes air, doesn’t like to eat apples, and makes everyone around her laugh.

Justice spent the second half of the presentation sharing her story. She told us about her experience losing her vision, the challenges she faced in her school, and what barriers she overcame with support from her family. Justice told us about her personal triumphs and struggles, as well as anecdotes from her life, including some stories from her time studying in Cape Town, South Africa. In telling her story, Justice gave a lot of fantastic and powerful advice. Above all else, Justice urged residents to never let other people’s fears become their own or let other people’s fears hold them back from achieving their dreams. If Justice had let other people’s fears impact her life decisions, she would never have traveled to South Africa and would not be living in the International Student House today. This point rung true for so many residents in the House, who have left their home countries, their familiar surroundings, their friends and family, to move somewhere completely new in pursuit of their dreams.

Something I realized when we were all sitting together that Sunday evening was the general recognition among residents of the enormous potential for growth that accompanies being open-minded and innovative in new environments and the thrill of leaning into the discomfort of all things “new.” Justice closed her presentation with an interactive exercise during which residents were able to experience what it’s like to live at ISH as a legally blind person. Justice assigned pairs of two different tasks (such as going downstairs and turning on the microwave, putting the washer machine on delicate cycle, or picking up mail from our mailbox) and one resident had to wear a blindfold.  Take a look at some of the pictures below of residents participating in the exercise. 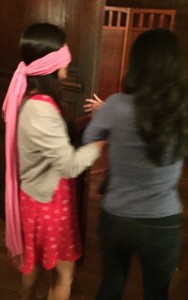 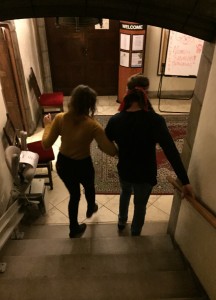 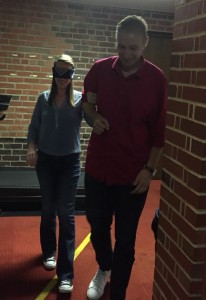 After residents completed the exercise, they shared their reflections about the experience. As you can imagine, many residents said that it was much more difficult than they thought it was going to be, that it was hard to determine what other people were doing around them, and how uncomfortable and uneasy they felt. Residents also explained that it was difficult to fully trust the person who was guiding them and to be completely dependent on another person for certain things like going up and down the stairs. Listening to my fellow housemates reflect on their experiences, I thought about how valuable it is to literally put yourself in someone else’s shoes and look at the world from someone else’s perspective. I’ve been doing a lot of thinking about this lately (especially around the concept of “targeted universalism” as it relates to economic opportunity, poverty, race, and political systems) and truly believe that, only by stepping outside of our own individual realities, are we able to create a community that is intentionally inclusive and equal for all.

Going one step beyond just understanding where someone is coming from and literally putting yourself in that person’s position is truly invaluable. This exercise brought to my attention so many things I had never seen or been aware of before. Before the evening began, I thought I had a fairly good understanding of the many challenges that Justice faces on a day to day basis, having shared many tribulations and triumphs from our days over late dinners in the dining hall. Ironically, it wasn’t until I put on a blind fold and tried to get up to the exercise room, did I see for myself how incredibly difficult it is to live in this House as a visually impaired person.

Bringing this long-winded-late-night-blog post to a close, I have been thinking a lot about strategies for bringing about positive social change, whether that be related to poverty alleviation, improving access to affordable healthcare and housing, or bringing back the Krispy Kreme donuts at ISH’s Saturday brunch! (This is a real campaign. As Justice is also a fan of the Saturday Krispy Kreme donut tradition, we’ve thought about calling our campaign, “Justice will be Served.” Stay tuned. We’ll be coming to a community organizing event near you!) In all seriousness, when thinking about bringing about positive social change, I keep coming back to this idea of “targeted universalism.” Lots more to say on that, including an enlightening quote from the ever wise, well-known thought leader, Jeanette Buljevich Haugh (my Mom)—stay tuned for my next post!

Country: United States
Organization: Innovation Network
Bio: Katherine is an avid believer in helping organizations harness the power of data analysis and evaluation in order to ignite positive social change. She holds a BA in Political Science, International Studies, and a minor in Chinese Professional Communication from the University of Wisconsin-Madison, where she graduated Phi Beta Kappa in May 2014. As a student at the University of Wisconsin-Madison, Katherine developed an interest in a wide range of security and development issues—from nuclear non-proliferation to post-conflict reconstruction—as well as a regional interest in South Asia and the Middle East. She currently works as a Research Assistant at Innovation Network, a non-profit consulting firm that specializes in conducting evaluations for social justice, public policy advocacy, public health, and community development initiatives. Katherine is also an aspiring graphic facilitator and works with organizations in DC to visually display their ideas and concepts in a fun and creative way (www.katherinehaugh.com). In her spare time, she spends as much time outdoors as she can (hiking, biking, running), loves thrift shopping and exploring DC’s vegan food scene, and volunteers with Girls on the Run-DC.