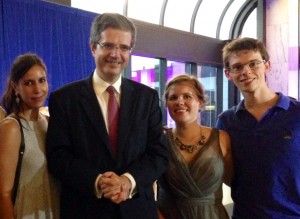 ISH French residents, Agathe Riquier, Florence Declaveillère and Hadrian De Blander were invited to celebrate the French National Day at the French Embassy and had an opportunity to meet Ambassador François Delattre.  Agathe is currently conducting research at the Smithsonian Institution’s Museum Conservation Institute as part of her Master’s Degree studies at the Université Panthéon – Sorbonne; Florence is serving as an intern with the National Trust for Historic Preservation; and Hadrian is participating in an internship in the field of oncology at the National Institutes of Health.   Commonly called the quatorze juillet, French citizens commemorate the beginning of the French Revolution with the Storming of the Bastille on July 14, 1789.  Agathe noted “The opportunity to celebrate Bastille Day in the nation that has certainly influenced the French Revolution was a valuable experience.”  The event featured traditional French food and drinks with a live band performing popular French songs. The residents were honored to meet the Ambassador.   Ambassador Delattre served as the Diplomatic Chair of ISH’s 2012 Global Leadership Awards, and has spoken at the House several times.  He will soon depart Washington to become France’s Ambassador to the United Nations.  ISHDC sends its congratulations and warm wishes to Ambassador Delattre in his new and important duties.  We remain grateful for his strong support of ISH over the past several years and look forward to continuing our warm relationship with his successor, who has not yet been appointed.

International Student House celebrated a Pacific Island Night organized by residents from the East-West Center who are interning in Washington, D.C.  The event featured traditional Pacific dances which the East-West Center residents performed and taught to the other residents in attendance.  This cultural celebration is one of many that occurs at ISH to showcase the diversity of the residents and to encourage cultural appreciation.

ISH Residents were treated to a unique opportunity to attend a Marine Corps’ Evening Parade hosted by the Commandant of the Marine Corps, General James Amos and Mrs. Bonnie Amos at the Marine Barracks on June 20. The Parade honored Secretary of Defense Chuck Hagel. Secretary Hagel’s wife, Lilibet, is a member of the ISH Board of Directors.

Residents also attended a reception preceding the parade at the Commandant’s residence at which time they met Commandant Amos, Sergeant Major Michael P. Barrett and Corporal William Kyle Carpenter. Corporal Carpenter  was recently awarded the Medal of Honor, the nation’s highest military honor, for his service in Afghanistan in 2010.

Sharon Elhadad, an ISH Resident from Israel, noted “This was truly a once in a lifetime experience. We were humbled to meet these brave men and women who serve in the Marine Corps. It was inspiring to hear Corporal Carpenter’s story of bravery. I would not have been exposed to such a rewarding opportunity without International Student House.”

Her Excellency Claudia Fritsche, Ambassador of Liechtenstein, hosted a luncheon discussion for a  group of ISH residents at her residence on June 13. Ambassador Fritsche provided insight into the culture, politics and history of Liechtenstein. She graciously responded to residents’ questions on a range of topics. She advised residents to ensure that despite which career path they choose they should maintain work life balance. The residents enjoyed her hospitality and learning about her country and experience.