Originally from Long Island, New York and a graduate of Hofstra University Honors College in New York, Josh came to ISH in August 2013. During his time at ISH, Josh has held two different internship positions, one on Capitol Hill and another with the American Association for the Advancement of Science (AAAS), where he continues to work. Josh is an active resident member with the ISH Committee on International Dialogue.

ISH-DC was privileged to have Dr. Thomas Schelling, a Nobel Prize winning economist, give a talk on February 18.  Schelling is recognized for his significant contributions to game theory, which explores the dynamics of cooperation and conflict. He has also studied climate change for decades, long before it became a major point of discussion.

He began his remarks exposing a common but false analogy about climate change. The notion of “greenhouse gases” is deceptive because the gases causing global warming—predominantly Co2— do not affect the atmosphere in the same way a greenhouse stores heat. He described several experiments one can conduct in a sink, such as one using dry ice, that give a better idea of how heat is trapped in a space by Co2.

Schelling said climate change will most strongly impact agriculture, particularly food, fisheries, and forests. He gave an example of California’s imperial valley, which relies on snow-melt to replenish its crops. Yet when there is less snow and more rain, the water flows directly to the ocean without the consistency that the snow-melt provides for the crops. While many industries will be adversely impacted, he noted that some will benefit from the changing environmental conditions.

While climate change will most strongly impact agriculture, developing nations will be affected to a much greater extent than developed nations. An increasing global population, coupled with a larger middle class and improved living standards mean a greater demand for food. As food becomes more scarce due to climate change, the prices will only become higher. Countries like the U.S. have the resources to feed its poor, but developing countries do not. It will then become a major point of contention to what extent rich countries can help their poorer counterparts.

He noted that many American cities are not prepared whatsoever to deal with rising water levels. The planning phase alone for building infrastructure to handle rising sea levels can take many years. The melting of the Antarctic ice sheet could soon become unstoppable, if it isn’t already, so this could become a reality in the near future.

He concluded his remarks highlighting cutting edge geoengineering concepts to mitigate the threat of climate change. There are numerous proposed methods for removing Co2 from the air. However, he pointed out, these are currently very expensive. There are also proposals to add sulfur to the atmosphere, which some believe can block some sunlight.

In response to a question about the political challenges of climate change, Schelling responded that unfortunately, it might take a natural disaster at a scale much larger than experienced before to motivate politicians to action. When asked about the role of the United Nations (UN) in regard to climate change, he said that the UN needs to mobilize rich countries to take action on climate change, but emphasized that the United States must assume a leadership position.

Over the last several months, residents have organized an ongoing series of in-house talks every Monday evening.  Relaxing on couches in the Great Hall, residents gather to benefit from one another’s expertise and experience.  The following provides brief summaries of the topics discussed:

The first talk featured a Uruguayan resident who provided a brief overview of his country. He specifically discussed President José Mujica, famously known as “the humblest president in the world,” for his modest lifestyle and donation of 90% of his salary. He described the significant social changes and progressive policies the president implemented and how they are clashing with a relatively conservative society. During another session, a Lebanese resident provided a similar overview of his country and its political history.

Another talk featured a resident working at Twitter’s Washington D.C. office.  She first provided a practical guide on how to utilize the website and what it can offer. She then explored some of the intersections between social media and policy/diplomacy. The following week, an Italian resident explained the historical and cultural roots of the Greek fiscal crisis—the subject of her economics thesis. She urged her fellow residents to consider the crisis as more than a monetary issue. She said that it is vital to remember the culture, thoughts and struggles of the Greek people while working towards viable economic solutions. Another resident spoke about the history of Native Americans and U.S. policies, highlighting historical treaties up to modern day issues facing their populations.

A Lebanese-American resident, who formerly led her university’s “toastmasters club,” provided advice on how to give a successful talk and not completely bore your audience. She emphasized that no matter what, one must always be prepared for the worst; if your slides don’t work, if your video doesn’t play, if you lose your written remarks, you must always be prepared to speak anyway. Afterward, she had residents participate in several fun improvisation activities where residents had to make a speech about a given topic without any preparation. The group discussed the general rule of improv of staying calm, remaining optimistic and working positively with your performance partners, which holds lessons for team activities of all kinds.

Most recently, a student working at the Federal Reserve spoke about big data. Big data is currently a source of much hype and concern, presenting many exciting technological innovations, especially for her work at the Reserve. However, as she pointed out, there are also tremendous risks and concerns, especially related to privacy. She described how big data presents a major policy challenge for the U.S. government because it must find a balance between regulation and not inhibiting innovation.

Current residents should regularly check the ISH facebook page for information on future sessions, which are held every Monday evening at 7:30pm.

On a windy autumn day in early October, a group of residents and board members traveled to the Smithsonian Biological Conservation Institute, located in the Shenandoah Valley, Virginia. The Institute houses the National Zoo’s research center and endangered animal breeding facilities. It only opens once a year to the public. While ISH board members had planned to bring a group of residents to the open house last fall, the Institute unfortunately canceled the event due to the government shutdown.

We learned that the land was originally the site of a U.S. Army Remount Service depot, where horses were trained for service in both World Wars. After World War II, the site was transferred to the Department of Agriculture and eventually given to the Smithsonian in 1975. In contrast to the National Zoo’s enormous diversity of animals, the Institute houses a small collection of endangered species, including red pandas, snow leopards, maned wolves, and kiwis. There were also many scientists exhibiting their research projects. One particularly interesting Smithsonian initiative uses satellite imagery to map forest destruction around the world. Overall, it was a pleasant, interesting day and refreshing to breathe fresh mountain air outside the city. 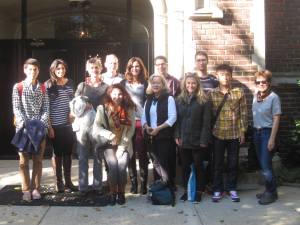 On a separate note, one of the best parts of living at ISH is the chance to partake in interesting conversations at dinner every night. I participated in a compelling discussion last week with two Chinese residents, a Finnish student and several American residents. It started when one resident brought up the recent pro-democracy protests in Hong Kong.

The Chinese residents remarked that in their personal experiences, American students too quickly assume that democracy is the best form of government. One of the Chinese residents suggested that this has to do with upbringing, such as the reverence of the American Revolution as taught in American classrooms. She said that other systems are too quickly denounced, arguing that the Chinese system, while heavily criticized in Western media, has been beneficial for the country. China has experienced unprecedented economic and social growth over the last several decades under its current political system. Additionally, recent government initiatives are attempting to root out corruption and improve educational standards.

The Finnish and American residents responded that while its recent growth is undeniable and admirable, China still has a long way to go in regard to human rights. One resident mentioned the Chinese government’s censoring of the Internet and the persecution of outspoken citizens, such as artist Ai Wei Wei. Additionally, the Finnish resident noted, the U.S. Constitution and democratic system is one of the most stable political systems ever created.

The Chinese residents countered that most people know how to easily access blocked websites, though indeed, the government does place restrictions on the population’s access. Perhaps their strongest counterargument, however, was their point that China isn’t ready for democracy. Its people do not yet have an adequate educational level to make informed decisions. Given China’s economic situation of the 20th century and today, a top-down government has been most effective. This has allowed for rapid implementation of national policies. Furthermore, though the government may limit rights to free speech and expression, it is continuing to provide greater social welfare programs. It is therefore not fair to equate the government of China with much harsher totalitarian regimes like those that exist in the Middle East. Perhaps one-day China could gradually transition into a democracy, but it is not ready yet. If China shifted to democracy today, it would be disastrous.

The Chinese residents shrewdly observed that lately, democracy is not working so effectively in the United States. An American resident pointed out that democracy is designed to be “messy,” and that the U.S. is not a direct democracy, but a democratic republic. I added that the political problems the U.S. faces today are not necessarily due to problems with the political system; gerrymandering and flexible campaign finance laws, for instance, have distorted the vision of our founding fathers, rendering citizens powerless in the face of political gridlock.

The debate continued for about an hour, long past the completion of our meals. We seemed to reach a consensus that in an ideal world removed from political and economic constraints, democracy would be favorable; it gives citizens a high level of control over the future of their country and ubiquitous civil rights. Yet given the complexities of the world today, the implementation of democratic systems may be too idealistic. Moreover, the conversation ended with everyone questioning their own beliefs, which is exactly what ISH is all about.

At a certain point, you will have inevitably seen all the main tourist attractions of Washington. I’m here to tell you that there are a ton of awesome (and often free) things to do that your Fodor’s guide to DC forgot to mention. Some of my favorite memories over my past year at ISH have been made pursuing unique events and unusual activities around the city. It takes a bit of work and research, but it often pays off.

There are a number of highly useful websites that you can check every week to learn what’s happening around the city:

Here are a few things to see you might not be aware of that are within close walking distance of ISH.

A Few Cool Nearby Local Restaurants/Bars

Washington is great for running and biking (or a leisurely walk). Here are a few routes to explore near the house:

While this is a small sample of many awesome things to do in Washington, I’ve already surpassed the word limit for this blog post. Now get out of the TV room and go experience Washington!