I returned from the winter holidays to the International Student House, and found new residents at the breakfast table. The House is a transitory space where old residents return and new ones come in and out. I have met so many new people in the past three weeks from: Italy, Peru, Japan, Sweden, Spain, Germany, France and even the U.S. But I also said goodbye to a good friend from Finland who stayed for over 6 months. The great news is that I now have so many more couches to sleep on when I travel around the world.

I find it fascinating how much foreigners know about the domestic politics of our country, and how up to date they are about world news and American foreign policy. This past week I watched the State of the Union Address in the living room of ISH, and the residents’ comments surprised me. Someone from Sweden talked about the Secretary of Education, DeVos, by name and another mentioned the latest government shutdown and how Senate Majority Leader McConnell and Speaker of the House Paul Ryan had to push through the temporary bill to fund the U.S. government for a few more weeks. Someone from Italy talked about our DACA program for illegal immigrants, and someone from Spain pointed out the difficulties that the State Department has faced with the hiring freeze. I know that the United States is an important country in the world, but I was still impressed by the level of detail these international students knew about U.S. policies.   We passed around chips, chocolate chip cookies, and even pretzel sticks during the debate while listening to everyone’s reactions. I learned about new views from other countries I hadn’t even considered. It was a great experience. 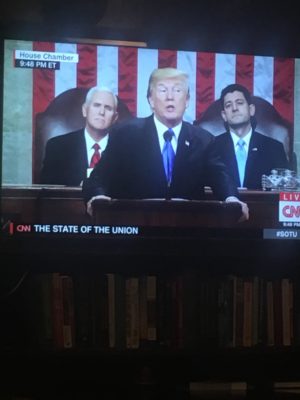 Residents watching the State of the Union Address at ISH

This month, I became a new Peer Orientation Assistant (POA) for ISH and have been paired with five new residents. As a POA, I give tours of the house to new residents, answer any questions they might have about the House or D.C. in general, and even grab a meal with them to learn more about their background and what they are doing in D.C. It felt nice to be the house expert and point of contact for these new residents, and it reminded of how I was in the first weeks.  I was excited to practice some of my French and German skills with some of the new residents, and even brush up on some Spanish words from Spain (I am from Colombia). I have also continued my front desk shifts, and checked in a new resident for the first time. 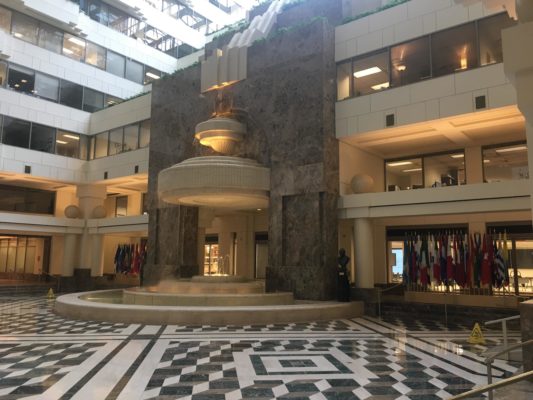 I went to the Inter-American Development Bank for the first time in January to visit a lead specialist on block-chain technology projects in Latin America. The specialist had given a talk at Georgetown University last semester, and I followed up with him afterwards to learn more about this new technology. The Bank is located in the center of D.C. and I was blown away by how beautiful the lobby is. After my visit I went home to ISH for dinner, and as I told a new resident about my experience she mentioned that she was currently interning at the Bank. We ended up talking for over twenty minutes about how the Bank operates and the cool projects they have lined up. There is never a dull moment at ISH!