Another month; another cultural exploration. This time, ISH residents congregated in the Great Hall to celebrate Japan Night, courtesy of our own Japanese residents. The Hall was impressively decked out – of particular note was an impressive floral arrangement artfully arranged around the chandelier in the center of the room; a wonderful nod to the arrival of cherry blossom season in DC. With residents in colorful yukatas and a variety of colorful games and masks displayed, the Hall was transformed into a vibrant wonderland for a few hours, a delightful reflection of the dynamism of modern-day Japan.

No ISH party would be complete without food or drink and a good array of Japanese snacks and drinks were set out for residents. I watched as ISH resident Yudai attempted to explain what daifukumochi was to some residents before they, smartly, decided to try some for themselves. (According to Wikipedia: “Daifukumochi, or Daifuku, is a Japanese confection consisting of a small round mochi stuffed with sweet filling, most commonly anko, sweetened red bean paste made from azuki beans: But honestly, you should probably just try it for yourself.) You’ve maybe tried a Kit Kat before, but probably not in the flavours on display at Japan Night. There were also different flavours of Pocky sticks (long biscuit sticks covered in chocolate coating), and my personal favourite, Chocopies. 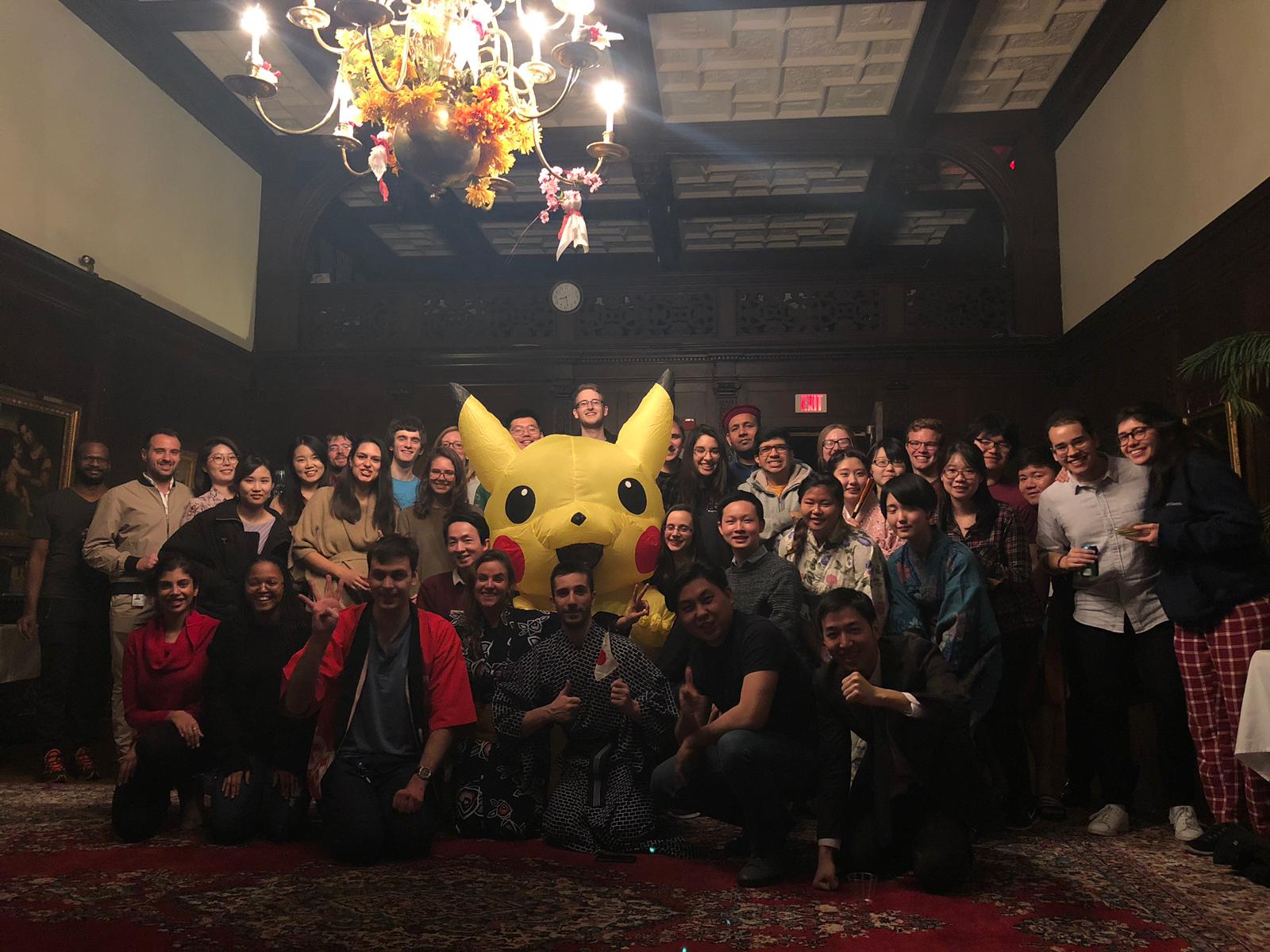 The party began proper when ISH resident Yukiko presented a very exciting video introducing Japan, giving us a taste of everything from tradition to its modern day progress. Then, with a deftness belying years of practice, new resident Mao demonstrated a traditional Japanese dance. While I don’t have the proper words to properly convey the skill she demonstrated in her dance, her movements were impressively grounded while still conveying a remarkable lightness.

If Mao’s performance brought a certain gravitas to the occasion, the next performance took all of us back to our childhoods. ISH was lucky enough to be graced by an adorably bubbly and bouncy Pikachu! (With many, many, many thanks to ISH resident Maki). (insert gif)

After pleasing the many ISH Pokemon fans with photos, Pickachu stuck around and helped to host a rousing game of trivia about Japan. Spoiler alert: putting your hands together in a prayer like position and bowing is not a Japanese greeting. I don’t know who actually won the game, but I’m pretty sure we all learnt quite a bit.  The end of the game was actually unclear because the last question revealed that quite a few of our fellow residents had birthdays close to that evening! The Japanese residents of ISH had very kindly arranged for cake (not one, but two!!) to be brought out in celebration of the occasion. It’s these moments of warmth and connection that make me grateful to live at ISH.

After that, the night turned into a karaoke party, beginning with a rousing rendition of the very viral “Pen Pineapple Apply Pen” song.

Somewhat ironically, or perhaps fittingly, the weekend also marked the departure of two of ISH’s Japanese residents, who returned to Japan to pursue jobs and school. Both were extremely dear friends of mine, and mine was a pain that every ISH residents comes to know at some point. When you live together, your friends see you not just in your no-makeup state, but also in pajamas-and-bedhead-fresh-out-of-bed-disaster condition, in all your horrid-day-at-work-and-therefore-done-with-life glory, in your stressed-out-and-in-need-of-shoulder moods… and the list goes on. So having two of them suddenly not around is unsettling, to say the least. I keep thinking one of them is going to be coming down the stairs, or that I’ll find them playing piano in the Great Hall, or playing Catan in the Dining Room.

I remember in particular one conversation over dinner, when we were talking about jazz bars.

“Yes, when”, my friend replied.

So I suppose, even if seeing your friends leave is awful, having these friendships that you can be so certain about and confident in makes it all more than worth it in the first place.