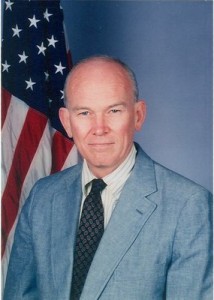 Philip C. Wilcox, Jr. is President of the Foundation for Middle East Peace, a Washington D.C.-based foundation devoted to fostering peace between Israelis and Palestinians. Wilcox retired from the U.S. Foreign Service in September 1997 after 31 years of service.

Born in Denver, Colorado on February 1, 1937, Wilcox attended public schools, graduated from Williams College with a BA in History in 1958, and obtained an LL.B. from the Stanford Law School in 1961.

After law school, Wilcox taught school in Sierra Leone, West Africa, and practiced law for three years in Denver with the firm of Holme, Roberts & Owen.

Wilcox entered the Foreign Service in 1966 and has served abroad at U.S. Embassies as Press Attache in Vientiane, Laos, Political and Economic/Commercial Officer in Jakarta, Indonesia, and as Chief of the Economic/Commercial Section in Dhaka, Bangladesh. His last overseas assignment was as Chief of Mission and U.S. Consul General, Jerusalem.

In the Department of State, Wilcox has served as Special Assistant to the Undersecretary for Management, Deputy Director for UN Political Affairs in the Bureau of International Organization Affairs, and in the Bureau for Middle Eastern and South Asian Affairs as Director for Regional Affairs, Director for Israeli and Arab-Israeli Affairs and as Deputy Assistant Secretary of State for Middle Eastern Affairs. He also served as Principal Deputy Assistant Secretary of State for Intelligence and Research and as Ambassador at Large and Coordinator for Counter Terrorism.

After his retirement, Wilcox was appointed by the Secretary of State to serve as a member of an Accountability Review Board, chaired by Admiral William Crowe (ret.) to examine and make recommendations concerning the terrorist bombing of the American Embassy in Nairobi, Kenya on August 7, 1998.

Wilcox speaks French and Indonesian. He is a graduate of the National War College, and has been awarded the Department of State’s Meritorious, Superior, and Presidential Honor Awards. He is a board member of the Middle East Institute and Americans for Near East Refugee Aid (ANERA) and a member of The Washington Institute for Foreign Affairs and Dacor-Bacon House. He and his wife Cynda live in Bethesda, Maryland.