This Saturday the best thing to do in DC was to stay indoors. The rain was pouring down and while the dreary feeling embraced the city, a warm and cozy feeling filled the indoors. It was time to make the most of this weather and ISH was the perfect setting. In a rainy day like that, we all (about fifty of us) gathered together under one roof – literally. It was time for talent night in ISH. 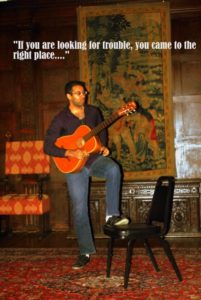 The night began with an exhibition of one of the resident’s paintings, with classical music as a backdrop. After this visual treat, music was next on the menu.

An American resident had the whole crowd burst into laughter when he started singing, “If you are looking for trouble, you came to the right place”. We sipped our wine as the rain fell and classy American Rock n Roll and Jazz filled the great hall. 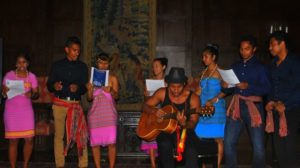 After the painting and music, it was time to see some moves with traditional dance forms, which included elements of storytelling. Before the dance form began, a short explanation with valuable knowledge about the culture and history of East Timor was presented to the community. It was inspiring to hear about a nation’s struggle for freedom against many odds and its victory in 2002. The dance form represented the East Timori community’s struggles and showed us how men and women worked together as a strong team to achieve their common goal of independence and freedom.

Performances went on to include dancing and singing. Chants of “Aloha” echoed in the hall with a contagious cheer. 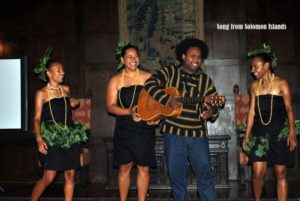 Rain outside, fireflies glowing amidst the raindrops of ISH garden, the art induced feel of community and togetherness inside – the visually enthralling evening was completed with delicious food and tasty wine. What could make it better?

Art, community, food and wine – life is good at ISH.