The night of February 5 at ISH was covered with many shades of red. That night I had a chicken dish in neon-orange color; that night was another perk of being at ISH: being exposed to a culture the most fun way possible from first hand, and most of the time, from your friends.

I will talk about the things that we did the whole evening shortly, but first I want to give a background of Chinese New Year (and how different it is from western style New Year celebrations). Chinese New Year is celebrated at the end of the Chinese lunisolar calendar, and the literal translation from the Chinese is ‘spring festival’. Although, during those days DC encountered one of the worst snowstorms of the year, maybe things are different on the other side of the world; no spring was here, not yet.  It is a major holiday in China and for its neighbors. Mainland China, Hong Kong, Macau, Taiwan, Singapore, Thailand, Cambodia, Indonesia, Malaysia, Mauritius, and the Philippines are countries that celebrate the New Year. Traditionally, the festival lasts for 15 days, but today, celebrations are usually concentrated in the first three days. Chinese people believe that a good start to the year within those three days will lead to a lucky year. Sounds familiar, any new year resolutions included?

I have already given you a hint about the delicious dinner, special for the new year.  The dining hall was decorated with flags of different animals from different years. However, laughter and beautiful music was calling from the upper floor. I was very surprised for the variety of events that our fellow Asian residents had prepared for us. Of course, the first stop was the beverages, and the Chinese beer which I grabbed was slightly stronger and bitter than US beer. Next stop was the ‘write your name (but please without making a mess!) in Chinese with Ink’ workshop.

I want to express my sincere thanks to Maggie for not turning me down when I asked her to write names for more than a few people. 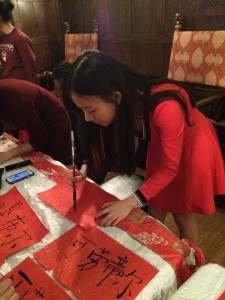 Another tasty beverage, Tea, the greatest present of China to the rest of the world, was also served by our beautiful residents, who were in their national clothes. I can still taste the smoothly prepared Oolong tea made by Jessie (I may or may not have drunk more than 6 of those tiny shot glasses.) 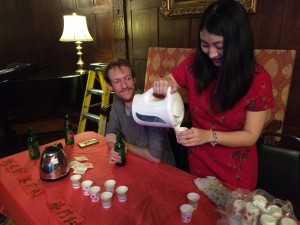 It was a great night and surely has its place as one of the greatest memories at ISH. I want to convey my sincere thanks to everyone who gave time and energy for the night. 你太棒了!  非常感谢你! Have a great Spring, everyone! 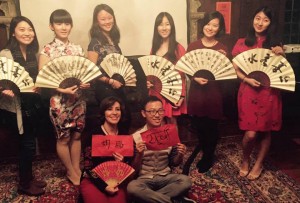