The Washington Nationals won the World Series. In case this means nothing to you- it’s baseball, and it’s a big thing, and it’s all anyone has talked to me about for a fortnight. Sports are great for bringing people together, and if you’re a sports fan, ISH apparently has a football team [soccer], and people are always playing tennis, basketball, and other sports. But what if, like me, you have no hand-eye coordination whatsoever, and just have no interest in sports at all? This is where music comes in.

This came about when I was wondering what to write about for this month’s blog (because, really, besides the museum visits, random weeknight Target runs for Halloween costumes, weekly movie nights, sporadic dinner conversations, GLAD Dinner, etc., what else is there really?). When I voiced this at dinner one night, my friend Sibel pointed out: “Oh, you should write about the music group!” 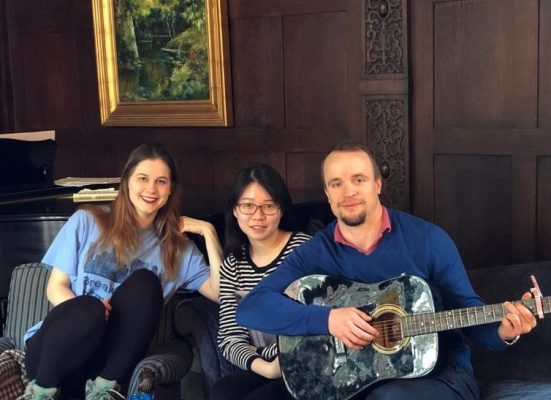 Actually, music at ISH is nothing new. There has already been another blog post by a previous resident detailing the many musical opportunities provided by ISH. (Take a look at “This house is full of music!” by Dorothée Stieber- although I would note that of the two guitars only one remains). But I suppose this is why writing about this is a good idea – because, like sports, music is a mainstay and has become almost a tradition at ISH. In fact, at some point over the summer, my friend Neil, a really gifted pianist, actually unearthed an old program from a music recital that some residents had put on years ago. He put it in one of the plastic stands and displayed it on top of the grand piano. It remains actual, physical evidence of this longstanding tradition.

I’m not exaggerating when I say that probably about 65% of the friends I make at ISH I made because of playing music. All the way back in January when I was a mere newbie, I can recall sitting in the hall tinkering with the strings on the guitar when someone asked me what I was doing. That someone was Filip, and he became key to my first introduction to music in the house. Somewhere in the course of our almost nightly jam sessions Anna joined in, with her perfect voice and harmonies. We also met Taka, who was basically a concert pianist, and Yukiko, who could play almost any song on the piano after having just heard it. Like sports, you don’t need to really know someone to join in, and so many residents have drifted in and out of all kinds of jam sessions- musical theatre, improvised lyrics, weepy ballad nights and song battles.

Music continues to bring residents together. This fall, ingenious residents in ISH actually started a WhatsApp group for “ISH Music Performers”! I unfortunately missed the inaugural meeting. But from the growing shared Spotify list that was shared on the group afterwards, it looks like it was a fruitful one. I’ve also joined in one or two impromptu sessions this season, and they’ve all been amazing. Maybe there will once again be a music recital at ISH in the future?

Just like sports, music brings with it a real camaraderie that really transcends cultures. Because you don’t really need to know a song to play the chords in it, and you can always learn. The variations in residents’ music taste has also been enlightening for me. I can proudly say that my initial repertoire of largely Taylor Swift songs has now grown to encompass a much wider variety of interesting and eclectic artistes (Radiohead, Elliot Smith, H.E.R, Amy Winehouse, Daniel Caesar- and those are all still on the mainstream side).

When the initial call for people to join the new music group came out, one of the most common responses was: “I play ____. But I didn’t bring my instrument.” So to all the prospective ISH residents who are music lovers our there, please bring your instruments when you move in!