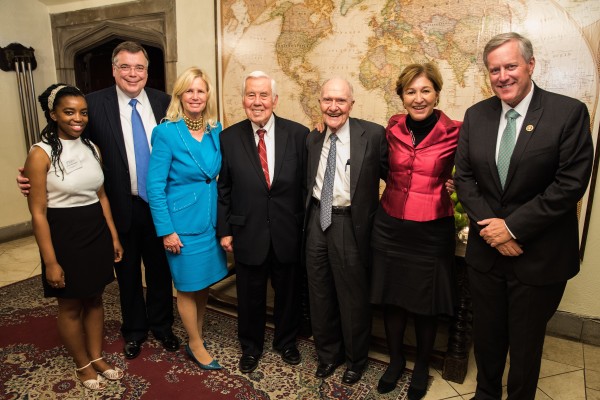 On Thursday, October 22, 2015, International Student House of Washington, DC held our annual Global Leadership Awards Dinner.  Members of Congress, Ambassadors and embassy representatives of 18 countries, and members of the business and philanthropic communities gathered to honor three outstanding individuals for their commitment to international understanding and to support the House.

Our Distinguished Alumni Award was conferred upon Former Prime Minister of Iceland, Ambassador Geir H. Haarde.  Ambassador Haarde was a resident of the House while he attended Johns Hopkins University.   ISH-DC resident from South Africa, Zinhle Mkhabela, paid a humorous and uplifting tribute to Ambassador Haarde citing his achievements and inspiring residents to such levels. Awards Presentation Remarks – Zinhle Mkhabela

The gala was made possible through the generosity and commitment of our sponsors, ISH-DC Board of Directors, and our Awards Dinner Committee and its Chairs.  Jan Smith was our Awards Dinner Chair.  Representative Mark Meadows (R-NC) and his wife Debbie served as this year’s Congressional Chairs.  Ambassador Kenichiro Sasae of Japan and Mrs. Nobuko Sasae served as Diplomatic Chairs.  We are deeply grateful for their support.