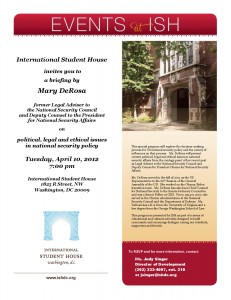 This special program will explore the decision-making process for US national security policy and the variety of influences on that process.   Ms. DeRosa will present current political, legal and ethical issues in national security affairs from the vantage point of her recent post as Legal Adviser to the National Security Council and Deputy Counsel to President Obama for National Security Affairs.

Ms. DeRosa served in the fall of 2011 as the US Representative to the 66th Session of the General Assembly of the UN.  She worked on the Obama/Biden transition team.  Ms. DeRosa has also been Chief Counsel for National Security to the Senate Judiciary Committee and was a Senior Fellow at CSIS.  From 1994 to 2001, she served in the Clinton administration at the National Security Council and the Department of Defense.  Ms. DeRosa has a B.A. from the University of Virginia and a law degree from the George Washington School of Law.

This program is presented by ISH as part of a series of educational and cultural activities designed to build community and encourage dialogue among our residents, supporters and friends.