The event celebrated ISH-DC’s mission of promoting international education and encouraging lifelong connections among students from around the world.  It took place at the Historic Whittemore House, close to International Student House’s own Tudor-style home in the Dupont Circle neighborhood.

In welcoming guests, ISH-DC Board President Eric Melby spoke of our pleasure in being able to honor these prominent individuals who support our community of students and young professionals, and of our highly diverse group of residents, who are preparing to become dynamic global leaders during their time in Washington. 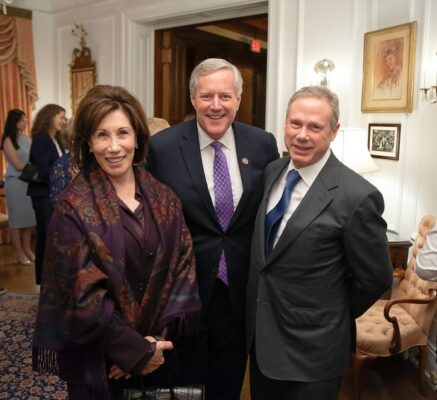 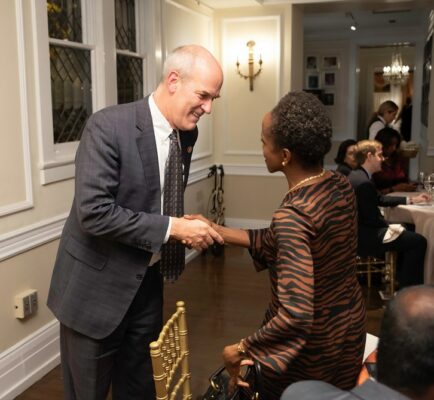 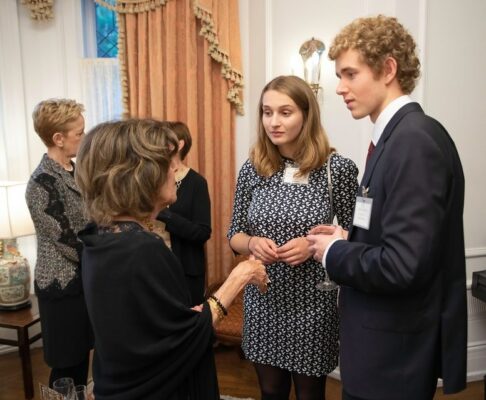 ISH-DC resident Rayza Oblitas presented the Global Leadership Awards to Congressmen Larsen and Meadows, both long-time supporters who have encouraged and engaged with our resident scholars over the years.  She spoke eloquently about their interest in ISH-DC and the importance of the relationships our students develop at the House.  Rayza, a graduate student at Johns Hopkins SAIS, spoke of the significance of learning from her fellow housemates and of the lasting bonds she has formed with young scholars from places far removed her home in Peru.

Jiawei Li of China, an ISH-DC alumnus now working at the IMF, closed the event with heartfelt remarks about his affection for his fellow residents, the warmth and hospitality extended to him by Board Members with whom he spent holidays, and the friendships which he has made with young professionals from around the world. 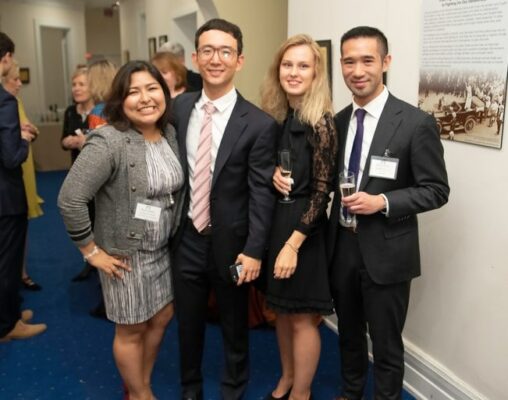 The evening would not have been possible without the support of our sponsors and we would like to thank them for their generosity.  The event is invaluable in enabling ISH-DC to provide a home for young scholars from diverse corners of the world as they pursue their goals and become engaged global citizens.

You can find more photos from the evening here.

THANK YOU TO OUR SPONSORS

Benefactors
Embassy of the State of Qatar

THANK YOU TO OUR HOST COMMITTEE

The first week of June marked for a few changes at the House. Many residents moved out after their spring semester ended and many new faces rolled in for summer internships. All this commotion leads to an interesting month for sure. One of the most memorable moments of June that had residents dressed up in their business best was a "Happy Hour" invitation from His Excellency Kurt Jaeger, the Ambassador of the Principality of Liechtenstein. This event was at the waterfront residence of the Ambassador and many current residents, as well as a handful of alumni, Board members and staff of both the Embassy and ISH attended. Ambassador Jaeger speaking to a group of ISH-DC resident scholars

This was an excellent opportunity for students with interest in international affairs and business to have conversations with Ambassador Jaeger about both his time in Foreign Service and the private sector. He has been the Ambassador of Liechtenstein to the United States of America since 2016, and the six years prior to this he was Ambassador to the European Union and Belgium. He also has years of experience in international regulatory affairs and the airline industry, just to touch on a few points from his extensive CV. The residency had a wonderful terrace view of the Potomac River and Georgetown,  where we were welcomed into the pristine and beautiful home of Ambassador and Mrs. Jaeger, who invited us to enjoy drinks and nibbles made for a truly unforgettable evening. All the ISH residents who attended felt personally welcomed by the Ambassador and Mrs. Jaeger, who won everyone over with their natural charisma and worldly knowledge. It was a very nice evening and the intermingle of ISH residents and embassy team was effortlessly smooth. I for one had a wonderful conversation with Mrs. Jaeger about pilates and the best parts of DC - including the Kennedy Center and the free performances on Millennium Stage. THANK YOU to Ambassador Jaeger, Mrs. Jaeger, and their team at the Embassy of Liechtenstein for an unforgettable night! 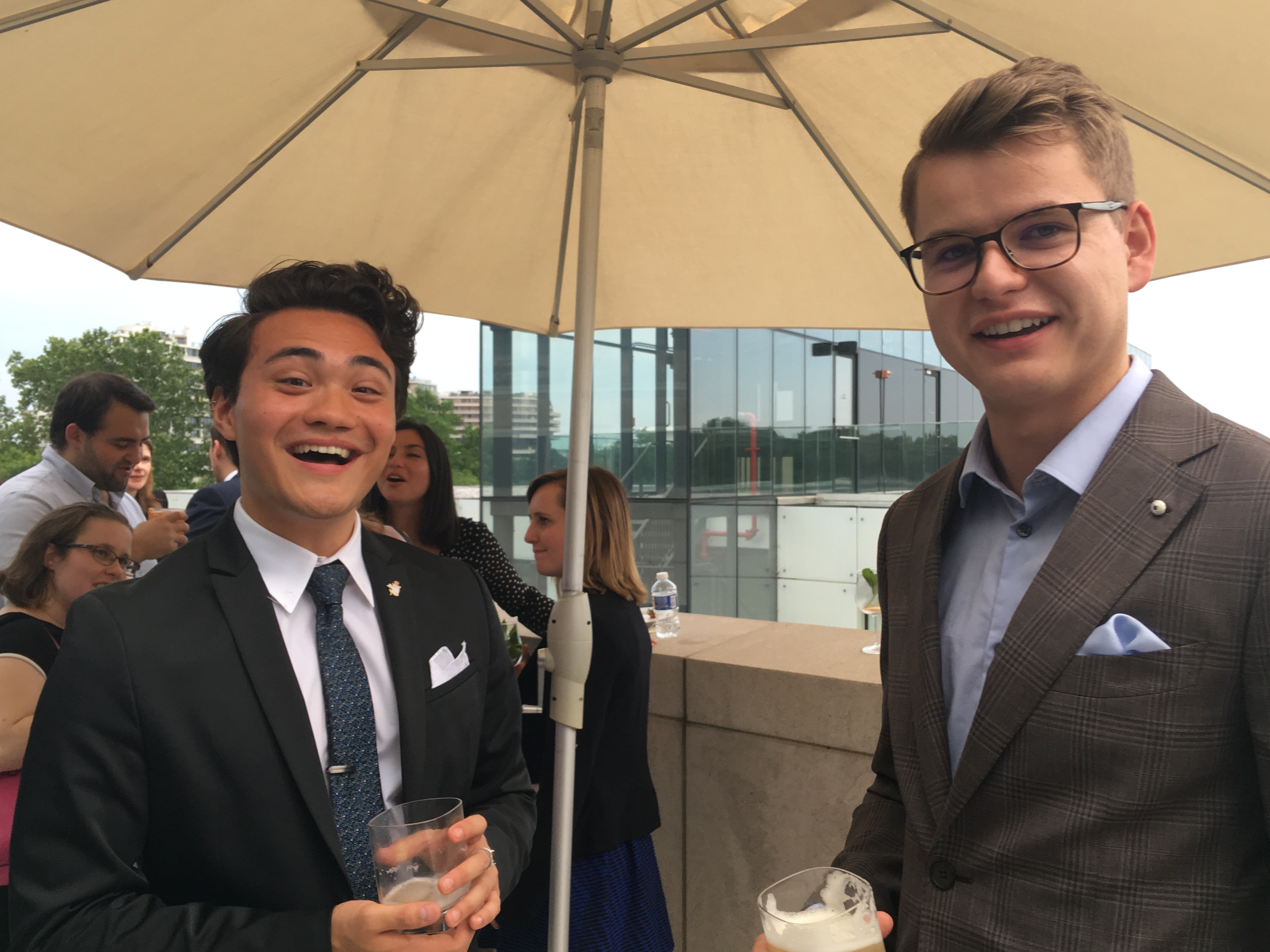 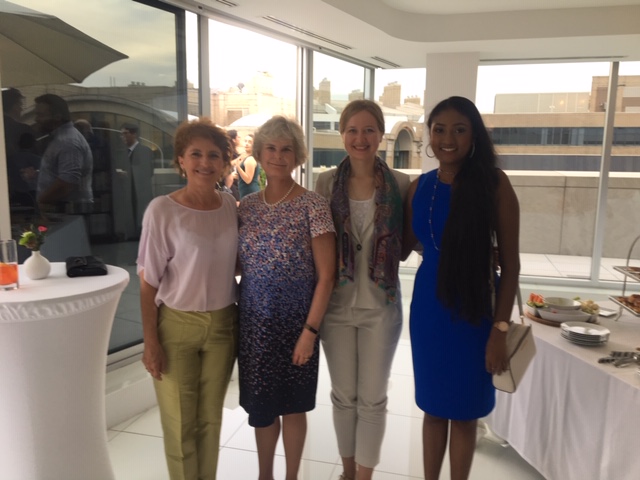 On the evening of May 30, the Board of Directors of International Student House of Washington, DC (ISH-DC) welcomed guests to our annual Spring Garden Party.  Despite the rainy afternoon, the House was filled with friends who joined us to celebrate the season and our mission of providing an exceptional residential experience for a highly diverse international community of graduate students and interns while here in Washington. 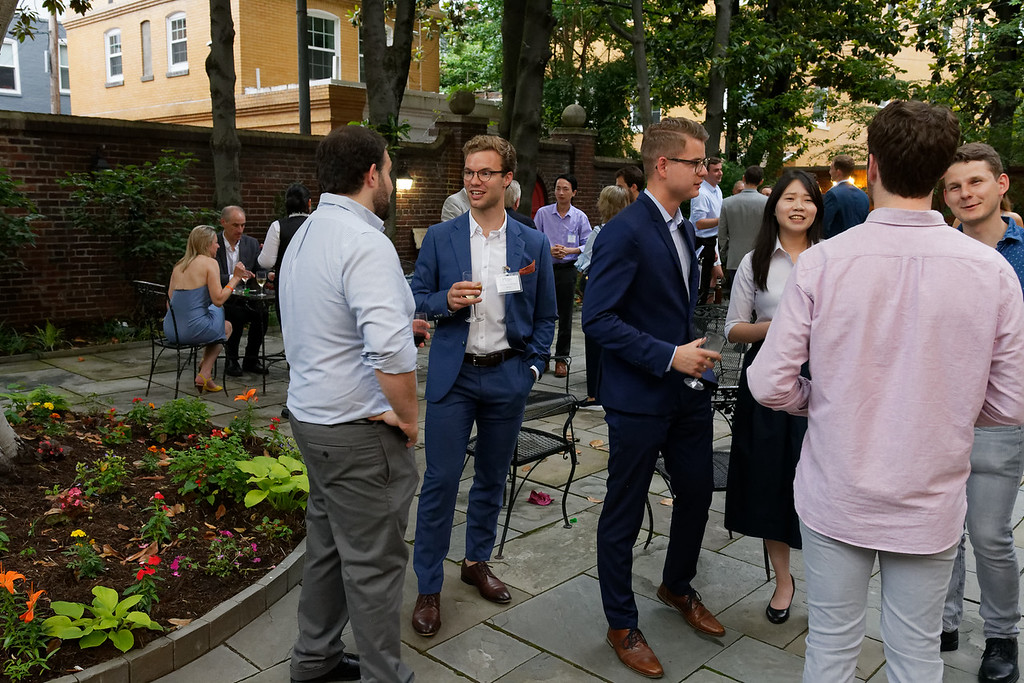 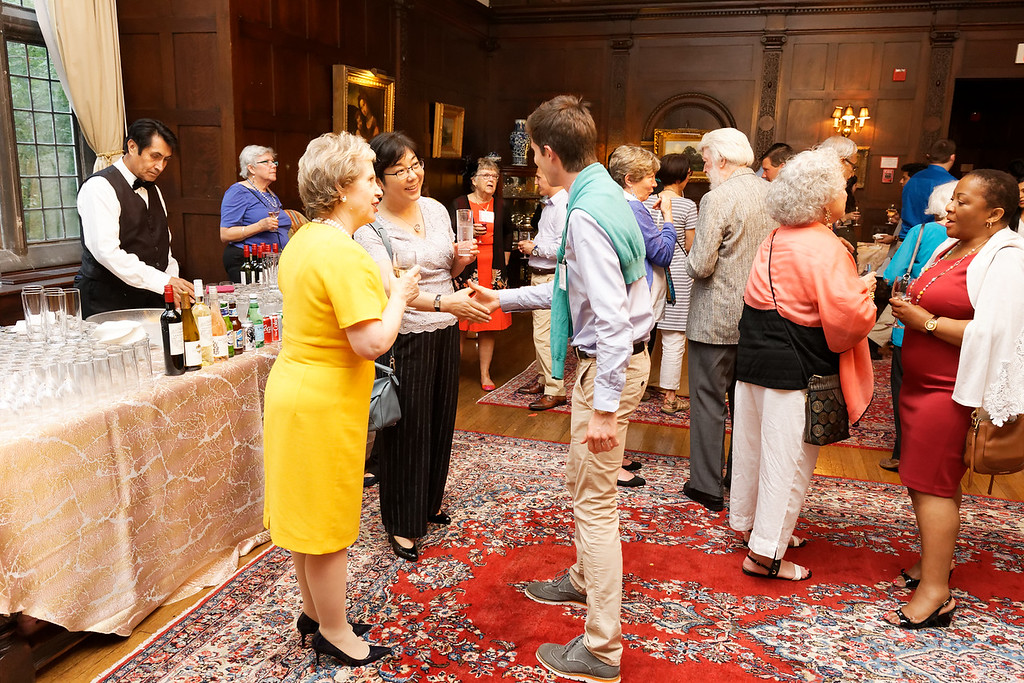 The Garden Party was once again a wonderful evening with our International Student House community as resident scholars from almost 40 countries had the opportunity to mingle with our many guests, including members of the diplomatic corps and prominent Washingtonians. This year the occasion coincided with a number of university graduations, giving our resident scholars who completed their studies another opportunity to celebrate their achievements. 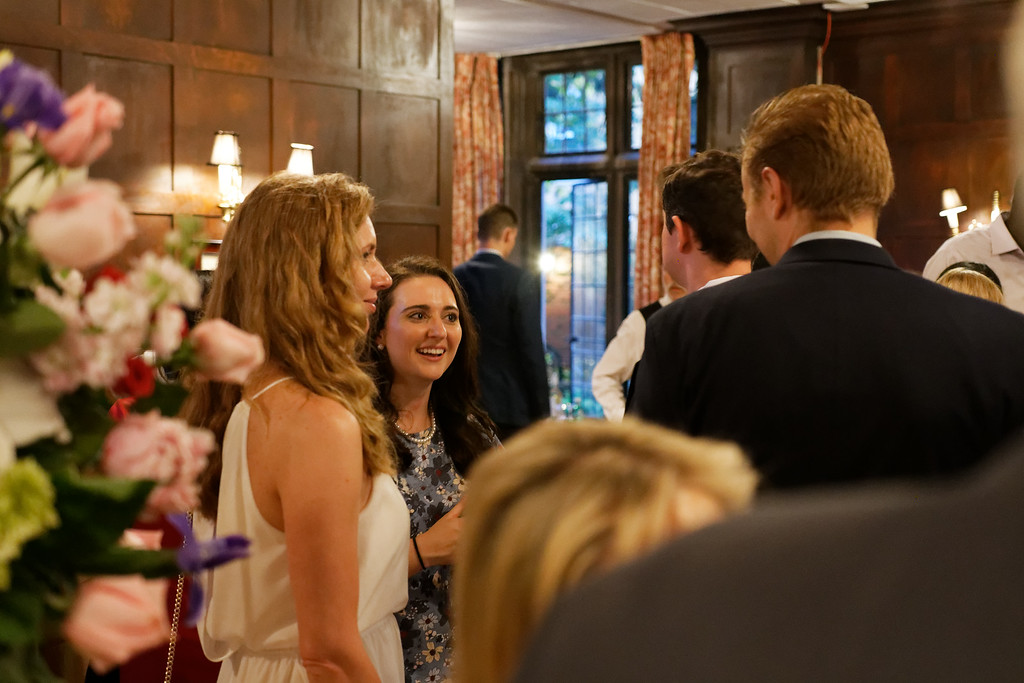 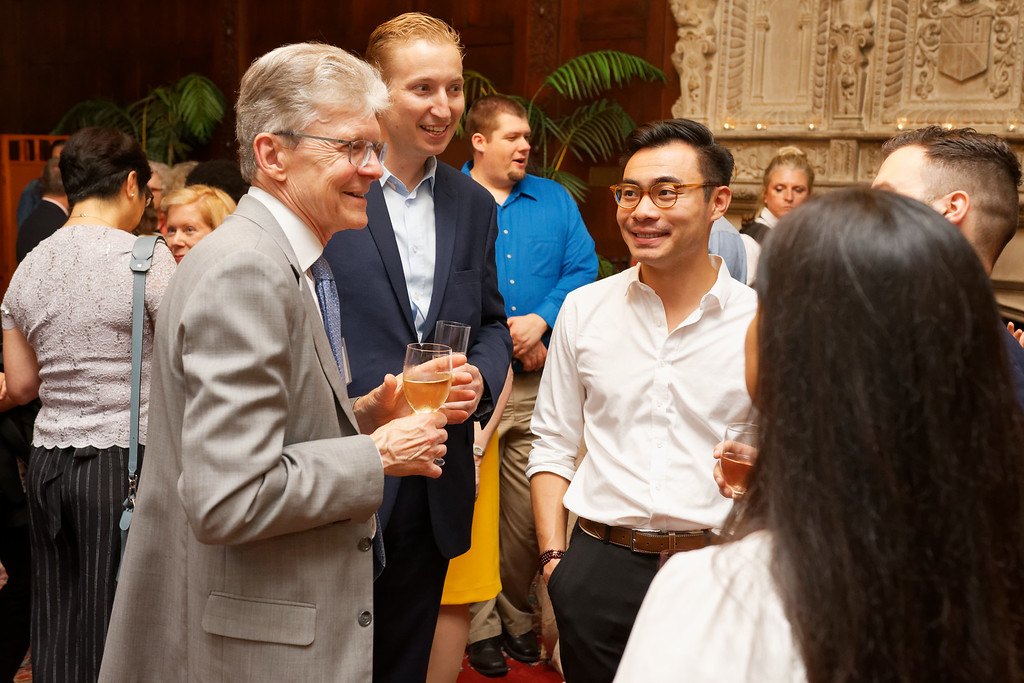 We also welcomed back a number of ISH-DC alumni, all having gone on to exciting careers, and who are active in supporting our current residents in their professional pursuits.  We are delighted to have such a strong alumni presence join us every year at our Garden Party. We remain grateful to our many advocates who help ensure our community is strong and vibrant, as well as a safe home for students from around the world to rely on for years to come. “ International Student House lays a strong foundation for international cooperation. Residents come from all over the world and gathered around one goal: fostering global citizenship. By global citizenship, I mean a core of shared values: open-mindedness, freedom, tolerance, and also the promotion of inter-cultural dialogue which is necessary for addressing global challenges.” – Julien Maire, ISH-DC Resident Scholar from France addressing guests

Guests being welcomed to the Ambassador's Residence

On the evening of February 25, our 2018 Global Leadership Awards Diplomatic Chair, Ambassador Gérard Araud of France graciously hosted an unforgettable evening at his residence.  The Ambassador and six of our students were joined by sponsors, Board members, Members of Congress, and friends to celebrate the mission of international education and the vital role the House plays in cultivating relationships among students from every corner of the globe. Ambassador Araud opened the evening by welcoming our guests and shared his long support of the House, having first joined ISH-DC when he addressed a room full of resident scholars over two years ago.  Our outstanding Dinner Chairs, Rear Admiral Susan Blumenthal and Isabel “Didi” Cutler, thanked the Ambassador and our sponsors, and shared about the importance of International Student House and their firm belief that our students are without a doubt future leaders in both the public and private sectors. International Student House resident scholar, Julien Maire from Véronnes, France had an opportunity to share about his time in the House.  Julien spoke about the meals and traditions that are shared among residents.  He emphasized that the House lays a strong foundation for international cooperation as students learn to engage with one another, and the friendships they begin here in Washington become more significant when they become leaders in all sectors around the world.  As they succeed professionally, friends become allies, and the relationships they begin as students have a profound impact.

We encourage you to read Julien’s full remarks here. We are grateful to Ambassador Araud for hosting this memorable evening, and we remain grateful to our generous sponsors who support our House and our mission of providing a unique cross-cultural experience to develop students and scholars into exemplary global citizens.

You can view more photos from the evening Here.