Several changes have come with the new year at ISH. Many residents moved out in December after completing semester study abroad programs or internships. While familiar faces remain, there are a lot of new additions to the ISH community. As introductory questions and conversation start up again between new and old residents interesting discoveries are made. For some who recently moved in this isn’t their first time living at ISH DC others have lived at international student houses in other cities around the world.

One of the first questions I tend to ask after the preliminary name, nationality and reason for being in DC is whether or not this is the first time someone has been to the United States. Responses range from people having completed their undergraduate in the U.S. to participating in an English immersion exchange program during high school to being first-timers.

In addition to getting to know the new residents, January has been a month of many opportunities to share U.S. political culture. For example, one of our Sunday dinners was soul food themed in honor of Martin Luther King Jr. day. There was also an ISH game night, which involved a variety of well known board games and card games. Several weeks later on the night of the state of the union address, several of us gathered in the TV room to watch the speech. Experiencing these historical, political moments with international company is a unique experience as an American. Talking about U.S. politics in a house with so many people interested in foreign affairs and global politics never fails to be interesting. 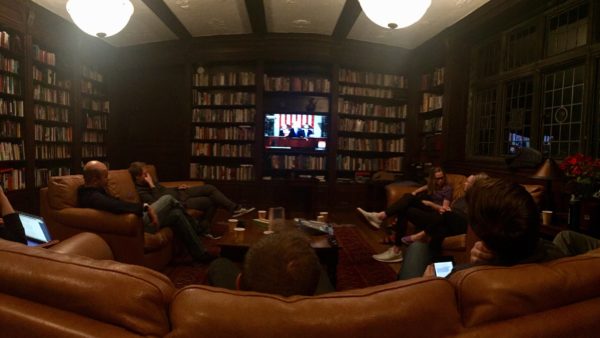 State of the Union watch party

One of the new residents decided to take advantage of the chatty, internationally minded nature of the ISH community by starting a new discussion group. Once a week a group of us will be meeting to discuss articles on issues of global importance. The first article is Susan Sontag’s “Regarding the Torture of Others”. The new readings series in addition to our weekly “salons” (a similar venue for talking about global affairs and culture) continue to make ISH an intellectually stimulating place to call home.