Deepak Ram: Deepak Ram is a versatile artist who is well known for his evocative performances in traditional North Indian (Hindustani) Classical Music, his collaborations with musicians of other genres, his innovative compositions and for his excellence as a teacher. He has been awarded the Best Instrumental Album, South African Music Awards in 2000. Deepak was selected by The Board of Directors of Indo-American Chamber of Commerce in California for the  2007 Award of Outstanding Contribution to Arts and Humanities. He has eight solo albums to his credit and as a session musician can be heard on over twenty-five albums. Deepak’s bansuri can also be heard on movie soundtracks, such as “The Fast And The Furious”, “Matrix Revolutions”, “India, Kingdom of the Tiger”, “Stealth” and “Before The Rains” 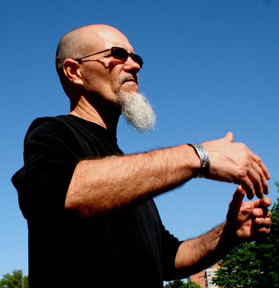 Pepe Gonzàlez: Living in Washington, DC, Pepe Gonzàlez is a performer, composer, producer, arranger, and teacher. He has performed largely within the Jazz, Afro-Caribbean and Brazilian idioms and has recorded extensively with national and international musicians. Pepe has played many festivals in the Caribbean, Spain, France, Greece, Italy and the Soviet Union. He recently recorded his first CD, Looking Back.