My first month at ISH came and went very quickly! Between grad school and ISH events there is always so much going on that time moves fast. I really appreciate how everyone at the House, whether they are interning, looking for jobs or going to school, is interested in learning and open to sharing and teaching about their field, background or country. There have been many interesting events at the house organized by residents these past few weeks. In early November there was a celebration of Mexican Independence Day complete with authentic Mexican candy, a piñata and margaritas. A few weeks later several German residents organized a briefing on the German elections and later live-streamed it in the TV room. 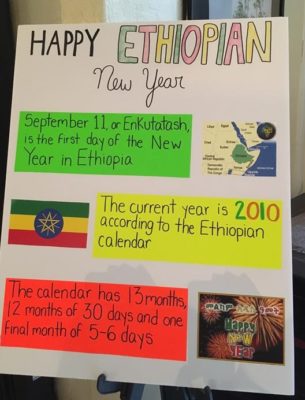 Some of my favorite learning experiences at ISH this past month have happened casually around the house. For example, I had an interesting conversation about how American reality TV shows are perceived abroad with a group of residents in the TV room as I watched ‘Keeping Up With the Kardashians’ for the first time (another example of something I never anticipated experiencing amongst such an internationally diverse group). Over brunch one Saturday I left the meal having learned that the Philippines is made up of 7,107 islands with over 170 languages spoken, something I had never even thought to wonder about before. Similarly, a conversation after the Mexican Independence Day celebration led to my learning that Kuwait celebrates both an Independence Day (from Britain in 1961) and a Liberation day (marking the end of the Gulf War in 1991) – the two holidays take place on February 25 and 26 respectively.

Another aspect that I love about living at ISH is the diversity of languages that are spoken. I’ve enjoyed keeping up my French speaking skills by talking with French residents over meals. On top of French, I recently started taking Portuguese language courses for the first time at Georgetown. As I’m studying new vocabulary or curious to know more about the cultural information my professor talks about in class, I can conveniently ask one of the three current residents from Brazil.

I contributed to the ISH spirit of cultural sharing and learning by wishing everyone a Happy Ethiopian New Year on September 11 through an informational poster. I had fun putting the poster together and ended up displaying it at the entrance of the House. I was pleased to hear that many people stopped to read the information and found it interesting.

I’ve learned so much living at ISH and pursuing my courses in Global Politics and Security already, I can only imagine how much more I will know (and be driven to learn) by the end of my graduate school experience. I am very happy to be constantly learning as well as questioning and developing my beliefs and values both inside the classroom and at home here at ISH.

I have been living at ISH for less than two weeks, yet I feel very at home here already. The experience of getting to know more about the House and meeting other residents happened simultaneously with full days of orientation for my graduate school program at Georgetown. Though I met many residents in the dining hall and common areas in the early days, what stands out in my memory as my official welcome into the ISH community was my first Sunday dinner. 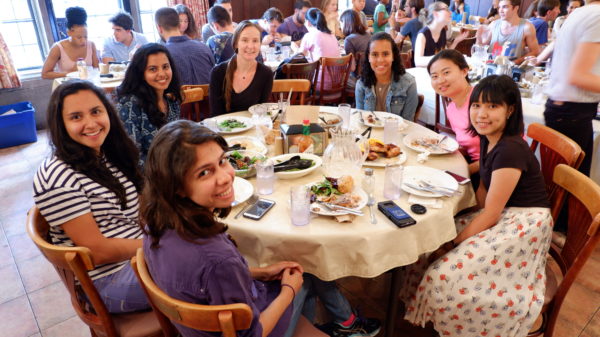 Every Sunday at 1pm sharp, everyone in the house comes together for a family style meal. When I came downstairs and found a seat at a table with food, plates and silverware it made me think back to meals I would have with my family growing up. As someone who has been a student, living away from home for over six years now, it is not often that I share a meal with people sitting around a table at a specified time. And it was very cool to see so many members of the ISH community together at once. While I appreciate the flexibility of eating dinner during the week at whatever time works best for us, there is something special about Sunday dinners. At my first one each of the (many) new residents stood up and introduced themselves and outgoing residents stood up and said something about their time at the House. After a moment of silence (per ISH tradition) we all sat down and began the meal, passing around dishes of delicious food.

Meal times have really been a key way for me to get to know people at ISH. I have really enjoyed sitting down amongst people I have not talked to much yet and learning about their story – where they’re from, what they’re doing here in D.C., how long they’ve been at ISH. I have found that my interest in international diplomacy and foreign service is commonly shared by many residents of the House. Though I have learned a lot about U.S. foreign service through the Rangel Fellowship program, it has been interesting to learn about public service careers in other countries. Every time I catch up with friends and family from home I tell them about the most recent interesting fact I learned at ISH, like that the U.S. Embassy in Baghdad is the largest embassy in the world or that Singapore has one of the lowest crime rates in the world.

I have had the opportunity to get to know more residents outside of meal times as well. Last weekend I went with a group of ISH residents to see a Redskins (American) football game. I would have never guessed that my first time going to a NFL football game would be with a such an internationally diverse group. Though I am not a big football fan, the time to chat with residents during the journey to the stadium and the experience of watching the game together was a great time. Another memorable event was a discussion hosted at ISH featuring Benjamin Wittes, a senior fellow at the Brookings Institution, about the constitutional issues at stake in the investigation of the U.S. President. There is always so much going on at ISH, I look forward to meeting more people and the many fun events to come.

As soon as I found out about ISH I knew I wanted to live there. Before my four-year undergraduate experience, I lived and studied at an international boarding school in Montezuma, New Mexico called the United World College USA (UWC-USA). UWC-USA consists of a campus of 200 students from over 80 countries. The experience of living in such a diverse environment caused my worldview to be simultaneously challenged and expanded in a life-changing way. Ultimately, ISH’s similar mission of fostering cross-cultural exchanges and forming global connections is what makes me most excited to move in and become part of the community.

Aside from the diversity of nationalities and personal stories behind how ISH residents and staff ended up in Washington, I appreciate the fact that ISH students attend a variety of universities. I am curious to compare and contrast my graduate school experiences with others at ISH, each of us with a unique perspective based on our concentration, extracurricular interests and university affiliations. Personally, I decided on Georgetown’s School of Foreign Service for my graduate studies because I will be entering the U.S. Foreign Service after I graduate through the Charles B. Rangel International Affairs Fellowship program.

Another feature about ISH that I look forward to is getting to know the neighborhood where it is situated. I have spent the past two summers living and interning in Washington D.C. but I am not too familiar with DuPont Circle area. I look forward to exploring and discovering what the neighborhood has to offer. Foggy Bottom and U Street, the areas where I’ve lived in the past, were very different environments, so I’m curious to compare and discover more of the greater DC metro area. And I couldn’t be happier about living in a city with so many Ethiopian restaurants, an aspect of my Ethiopian-American culture that I love sharing!

I committed to living at ISH several months ago, and it’s hard to believe that the seemingly distant August 15 move-in date is so close. I am very excited for what is to come now that ISH will become my home in a matter of days!